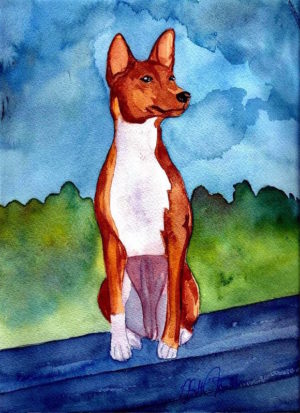 The Basenji, as we all know, is part of the AKC Hound group, but is it a scenthound or a sighthound?

The American Sighthound Field Association considers the breed to be eligible for lure coursing – a sighthound activity – as does the Canadian Kennel Club, the AKC, and the United Kennel Club (which lists the Basenji in its Sighthound and Pariah group). The FCI, however does not, possibly because it views the breed’s hunting style and body structure as inappropriate for a sighthound.

To our knowledge, the Rhodesian Ridgeback, Cirneco dell’Etna, Portuguese Podengo,  Podenco Canario, Ibizan Hound, Pharaoh Hound, Peruvian Inca Orchid and Thai Ridgeback all also fall into this “grey” area. In the end, however, the definitive answer, at least in the United States, as to what kind of hound the Basenji is comes in its AKC breed standard which states that the Basenji hunts by both sight and scent.

It also hunts by jumping up and down. One of the Basenji’s popular nicknames comes from its African name, “m’bwa m’kube m’bwa wamwitu,” which translates to the “jumping up and down dog.” The Basenji has a tendency to leap up high over tall grass to take a look around and check for prey while in the air. In fact, there are owner reports of the dogs standing on their rear legs like a meerkat when they’re curious about something.