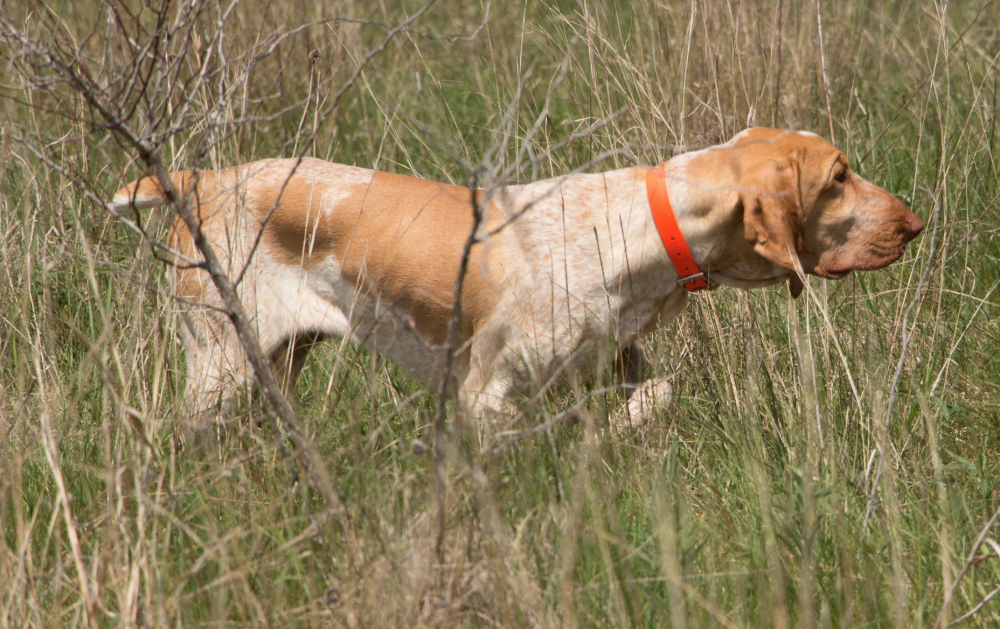 The Bracco Italiano is one of only two native Italian Gundog breeds (the other being the Spinone), and is believed to be the ancestor of  European pointing breeds such as the English Pointer, Brittany, German Shorthaired Pointer, and Portuguese Pointer. It’s considered to be one of the oldest of all gun dogs, a notion supported by paintings and text from the fourth and fifth centuries B.C.

Some sources suggest that the Bracco was a cross between the Asiatic Mastiff and the Segugio Italiano, while others claim that the ancient St. Hubert Hound is its more likely ancestor. We may never be as certain of its distant origins as we are about its popularity with Italy’s upper crust during the Renaissance. Bred by both the Medici and Gonzaga families, Bracchi were often gifted by Italian officials to foreign dignitaries to hunt feathered game. During this time, they were known as “bracchi of the net,” for the practice of hunters throwing a large net over a covey of birds.

At one time, there were two distinct types of Bracco Italiano: One type, the white-and-orange Piedmontese from Piemont, was described as being light boned, very similar to the French short haired pointing, and most suited to work in the mountains. The other type was the heavier, roan-and-brown colored Lombardict with the jaunty gallop, a dog bred in Lombardia and better equipped to hunt marshy lowlands.  One source we came across suggested that the Piedmontese and Lombardic were simply color variants of the same breed, rather than distinct varieties. We leave that discussion to breed experts.

The fact remains that by the end of the 19th century, the Bracco Italiano faced extinction. It was saved primarily by the efforts of the Societa Amitori Bracco Italiano and an Italian breeder, Ferdinando Delor de Ferrabouc.  One source writes that to preserve genetic diversity, the two variations of the breed were combined, and a height chosen in the new standard that ranged from the minimum height of the “light” Bracco, to the maximum height of the “heavy” Bracco.

In 1980, the Bracco Italiano was brought to the United Kingdom, though it would be nearly 15 years before the breed came to the United States. In 2001 the Bracco was accepted into the AKC Foundation Stock Service.  Perhaps a Bracco owner can tell us when full AKC acceptance may be expected?

11 thoughts on “A Snippet of Bracco Italiano History”