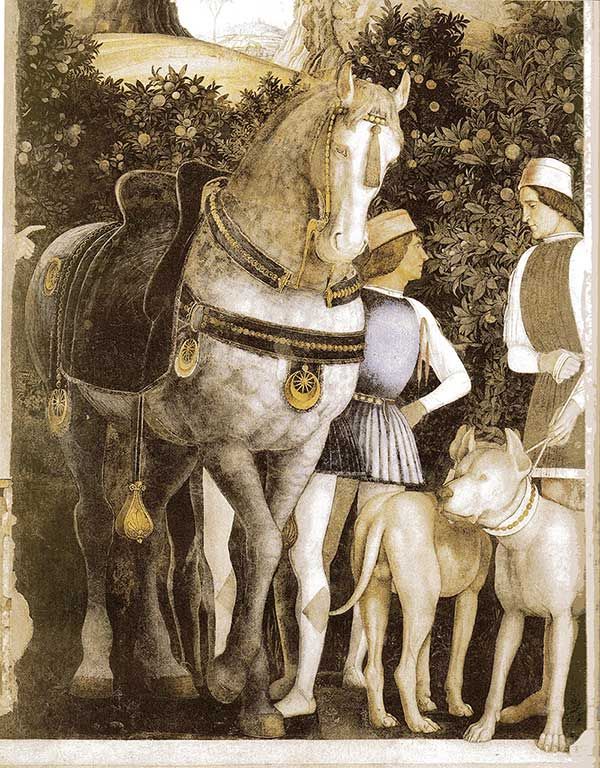 Tracing its origins back to Italy, and before that, to the ancient state of Epirus in modern day Greece, Albania, and Montenegro, the Cane Corso is considered by many to be the closest living relative of the ancient Mesopotamical Molossians, or Roman canis Pugnaces, the Roman War dog of the first century. Initially used as ancient”auxiliary warriors” in battle, Cane Corsos eventually became hunters, catch dogs with cattle, and guard dogs. The modernization of agriculture coupled with the disappearance of wild game reduced traditional roles of Cane Corsi (the plural of Cane Corso, also written as “Cani Corsi”) and the breed suffered drastic reduction.  Many rural farmers too poor to afford modern machinery hung on to their dogs (and many simply did not want to part with their beloved Cane Corsos), but finding a Cane Corso was becoming difficult in all but the southernmost reaches of Italy.  Making matters worse was that one of the main thrusts of Allied Advances during WWII saw heavy fighting where these dogs lived. A sizable number were killed, many as they defended their homes and families.

By the early 70s, it was mostly old men who remembered the dogs of their youth and refused to let them go extinct.  Giovanni Bonnetti was one such man, and he realized that without the help of breeders, the Cane Corso would vanish.  In 1973, Bonnetti learned of Dr. Paolo Breber, a prominent and influential dog lover, and alerted him that the Cane Corso could still be found in parts of Southern Italy.  Dr. Breber became keenly interested, and with his documentation on the breed, he brought the Cane Corso to the attention of the public around 1976. Breber’s article about the breed was published in a number of Italian Kennel Club magazines which he followed up with a rescue mission carried out by breed enthusiasts. In 1983, they formed the S.A.C.C. (Società Amatori Cane Corso) to save the breed from obscurity. The club continued to promote and protect the breed while  seeking official recognition with major kennel clubs.  In 1994, the Cane Corso was fully recognized by the Italian Kennel Club, and full acceptance with the Federation Internationale Cynologique came in 1996. The first Cane Corso arrived in the United States in 1988, and in 2008, the United Kennel Club granted full recognition.  The AKC followed suit in 2010, placing the breed in the Working Group.

Ancient breeds often are known throughout history by many names, and the Cane Corso was at various times known as the Cane Corz, the Cane di Macellaio, the Cane Pugliese, the Dogo di Puglia, the Sicilian Branchiero, the Italian Mastiff, and the Pugliese Mastiff. As for its current name, there is a variety of thought about its origins. Many believe the name derives from the old term used to describe catch dogs used on cattle, in boar hunting, and the ancient and cruel sport of bear fighting – cane da corso.  Some maintain that the name comes from, “Cane” (or dog) combined with “Corso” (or main courtyard) and refers to a village’s largest house which was home to the family best suited to breed the dogs.  Some cynologists have written that Cane Corso as translated from Latin means “the dog guarding enclosed estates,” while another source writes that “Cane Corso” translates in Italian to “run dog.” By any name, today’s Cane Corso is a powerful, muscular, and athletic breed. Intensely loyal, these dogs become completely devoted to their families and would lay their lives down for them without hesitation.

Image: “Return from the Hunt” by Mantegna in Palazzo Ducale in Mantua.

Much of what we know about purebred dogs of the past can be found in artwork and vintage photographs. We love this antique photo of a beautiful African-American woman and her American Staffordshire Terrier on a photo post card that dates from 1910-1918. What, do we wonder, was the dog’s name? Did they go for walks? Did she give him treats under the dinner table? The photo seen here is one of 115 antique photos in a variety of settings found in the book, “Picturing Dogs, Seeing Ourselves: Vintage American Photographs” by Ann-Janine Morey.What is the oldest photo of your breed that you've ever seen?
... See MoreSee Less

By now, it’s a National Purebred Dog Day® mantra that “soundness is not just for show dogs.” If your dog plays, runs, or jumps on and off a couch, this stuff matters.
... See MoreSee Less

It takes “students of dogs” years to learn the mechanics of how dogs work, and why a sound dog can work and play all day long, while an unsound one poops out after an hour. We can’t teach canine...

The biggest, most limpid puppy dog eyes in the world (and these are pretty good ones) won't make a Monday morning go away. Photo by Kitty Adair 6pousorendh of "ZsaZsa," a. Longhaired, creme colored Dachshund
... See MoreSee Less