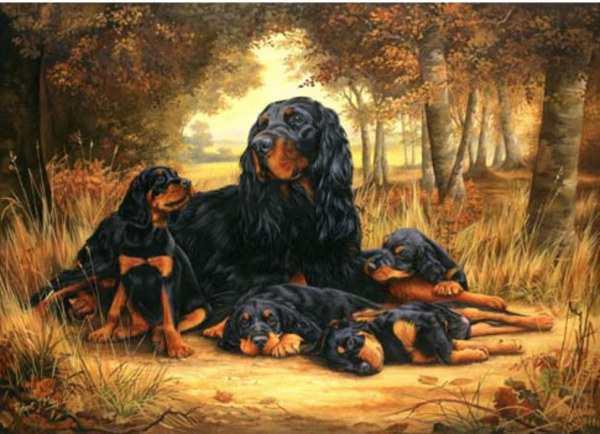 “Back in the day,” perhaps as early as the 16th century, setting spaniels were bred on many large shooting estates to quarter the ground and locate grouse (or any other bird that would try to avoid a predator by hiding rather than trying to fly away). Setters and Spaniels weren’t separated by breed in those days, but by size. The smaller dogs were taught to flush the game, the larger dogs to “set” (crouch low to the ground so the hunter could throw nets over the game.) Over time, the setting dogs were developed independent of the spaniels to work the birds on the heavy heather covered Scottish moors. It is from these dogs that came setters as we know them today (though at the time, there was no preference for one color over another).

The fourth Duke of Gordon had a kennel of wonderful working setters at Gordon Castle not far from the River Spey in UK, and while these dogs were black, white and tan, black and white, and black and tan, the Duke had a particular preference for the black and tan setters (we know with certainty that he had black and tan setters at Gordon Castle as early as 1825). He is credited with establishing the breed we now know as Gordon Setter, though that name wasn’t given to the breed by the Kennel Club until 1924. Until then, the breed was known as the Black and Tan Setter, but it was renamed as a nod to the man who created the breed standard, and popularized the breed during the early 1800s. Gordons were at the first field trial ever held in England in 1865, and they took a clean sweep of prizes having won first, second and third place.

In 1842, the Gordon Setter was brought to America by George Blunt and his friend, the 14th Secretary of State, Daniel Webster. The setters, named “Rake” and “Rachel”  were secured in a purchase directly from the 4th Duke of Gordon, and these two dogs are considered to be the mother and father of all Gordon Setters in the United States.  They made a good showing at the Tennessee Sportsman’s Association Trial in 1874, the first field trial held in the United States, by winning first, fourth and seventh place. In 1875, Robert Chapman organized a show for the Setters, showing them off for the first time. The breed was fully recognized by the American Kennel Club in 1892

In Scotland, meanwhile, large shooting estates were starting to decline, and the big and heavy Gordon, rarely seen outside of the country, started to lose ground to dogs with less stamina, but greater speed.  In the first half of the 20th Century, the Setter’s numbers continued to trend downwards. In 1923, only 54 Black and Tan Setters were registered with the Kennel Club, and by the end of the Second World War,  the breed was becoming more popular as a family pet rather than a working gundog. In America, the Gordon Setter was the preferred dog when it was legal for professional hunters to sell large quantities of game to the markets. When that era ended, the Gordon went into decline in the States, as well.

Today, this fabulous dog is listed on the Kennel Club’s list of Vulnerable Breeds which registered just 250 dogs in 2014, and 234 in 2015. In this country, the breed fared slightly better because the AKC registered 535 Gordon Setters in 2010. One source, however, calculated past numbers and determined that there’s been a 68% decline in the number of Gordon Setters registered with the AKC in 22 years. A “call to action” is certainly in order, and we hope this Purebred of Interest feature helps in some small way to bring attention to the breed’s situation.

“The Next Generation” lithography by Robert J. May. Find this print for purchase here.