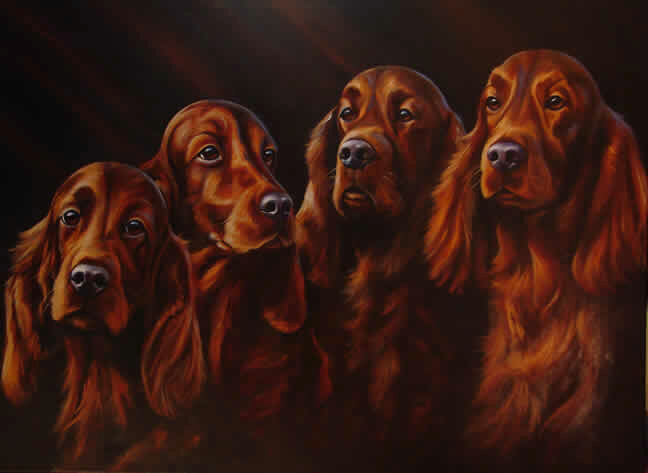 The Irish Setter’s precise ancestry is often the subject of debate: Some sources theorize that crosses of Irish Water Spaniels and Irish Terriers were the Irish’s earliest ancestors, while other experts believe that English Setters crossed with Irish Water Spaniels, Springer Spaniels and Pointers, with perhaps some Gordon Setter thrown into the mix, were the more likely ancestors. That being said, Irish hunters on foot greatly valued a dog that could point and retrieve, and early ancestors of the modern Irish Setter were chosen for their hunting abilities, not their color or conformation.

It wasn’t until the later part of the 17th century that hunters began breeding for particular types of setters that would eventually evolve into recognizable and separate breeds; Irish breeders bred for a slightly taller, rangier and superbly athletic type of hunting dog that would eventually be known as the Irish Setter.

These early ancestors were probably much smaller and with less coat than today’s dogs, and their hunting style was to stay fairly close to the hunter, certainly within shooting distance, and to run back and forth in a short zigzag pattern in front of the hunter – wider in open spaces and narrower in forests or more confined areas. These original dogs came in several colors, the Irish Setter and the Irish Red and White Setter considered to be the same breed for some time. It’s believed that the solid red setter didn’t appeared in Ireland until in the 19th century. In fact, the Irish Earl of Enniskillen may have started the fad for solid red dogs because by 1812, he declared he would have no other kind in his kennels.

“The Jonromacs” by Dave White. This print is available for purchase here:

4 thoughts on “A Snippet of Irish Setter History”