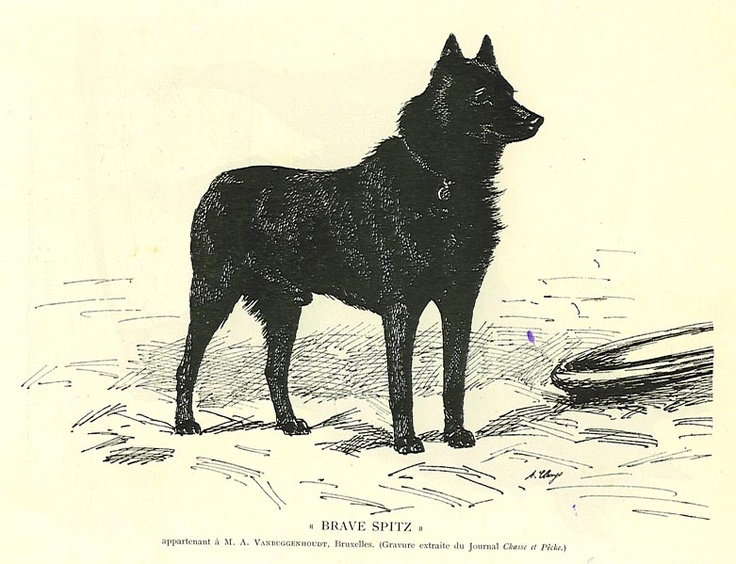 As with many breeds, it’s difficult to pinpoint the exact origins of the Schipperke, but theories abound. Some experts believe the dog originally belonged to boatmen who crisscrossed from Brussels to Antwerp, the weight of their argument based on the fact that in Flemish, a “schip” is a boat, and Schipperke means “small boatman.” Belgians themselves, however, didn’t refer to the dog as a “Schipperke,” but as a spitz, or Spitske (little Spits).

Others theorize that the little dog found in trade guilds and middle class homes where it worked as a ratter and watchdog was so similar to the Belgian Sheepdog, that the name Schipperke may have been derived from “scheper,” a word for shepherd.

And finally, there is the belief that the Schipperke is descended from the Leauvenaar, a black sheepdog that followed wagons as they traveled along provincial Belgian roads. From the Schipperke Club of America: “In the mid-19th century some of these 40-pound sheepdogs were still herding sheep in the neighborhood of Louvain, and from these both the Schipperke and the Groenendael have descended. The Schipperke was bred down to become that “excellent and faithful” little watchdog that we know.”

Of this there is little doubt: The breed is old.  In the late 15th century, the breed was chronicled by the monk, Wenceslas, as the impersonation of the Devil, and Belgian writings from the 15th and 16th century mention a small, tailless black dog of intermediate size. In 1690, a group of shoemakers in the St. Gery quarter organized competitive exhibitions of Schipperkes on designated Sundays in the Grand Place in Brussels, events they called, “Sunday beauty contests.”

In those early days, the dogs were owned by workers and average citizens. This changed when Queen Marie Henriette, wife of Leopold 2nd, became smitten with a dog she saw at a dog show in Brussels in 1885 . She bought the dog, named him, “Black,” and was often seen walking and driving about with her dog. Voila, it became fashionable among elites to own a Schipperke.

By the end of the 19th century, the Schipperke was the most popular household dog in Belgium, and especially fashionable in Brussels. Not surprisingly, the breed was protected by the disciples of Saint Crispin, the patron saint of cobblers, curriers, tanners, and leather workers.

Over-popularity, however, is not a modern day outcome for a breed. So many dogs were exported to England that its numbers were falling in Belgium.  In the 1880s, a group of fanciers banded together to replenish the breed, and set forth a standard of desirable points to restore breed purity.

One thought on “A Snippet of Schipperke History”