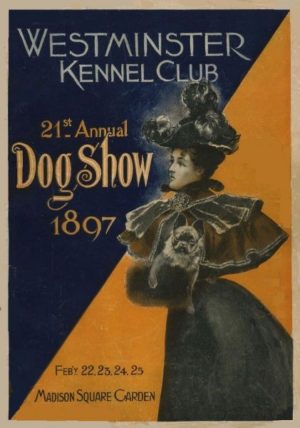 It’s usually dog show grist: A dog is disqualified from the ring, and it’s off to the races for gossipers, ring side observers, and those who feel the dog was wronged, or that the judge was right. The aforementioned scenario is hardly a facet of showing a dog in the 21st century.

Consider “Salvolatile” a famous French Bulldog who was shown several times, and received awards. One of her ribbons was won at the Waldorf-Astoria Hotel in New York City.

After the show at the Waldorf-Astoria, a protest was lodged contesting the background of the dog. 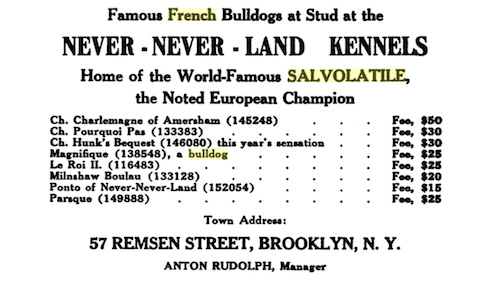 Salvolatile’s ancestry was questioned because she was very “bully” in type. The AKC disqualified the dog, and she was never shown again.  The year: 1910.

Not having been there (we’re not that old), and the Frenchie not being our own breed, we can’t say whether the AKC was to be commended for having stayed true to the standard, or that jealousy over the dog’s success prevailed, but it’s certain that as long as people have been competing at dog shows, there have been controversies.

Less controversial is the enduring popularity of the French Bulldog. Last year in 2018, the breed was the most popular breed in New York City, Los Angeles, San Francisco, West Palm Beach, and Chicago. It was hardly the first time. The Frenchie was so popular at one point in its history that Westminster Kennel Club replaced the famous and traditional logo of Sensation, the Pointer, with a French Bulldog and his mistress on the cover of its show catalog. That year was 1897, and the image is at the top.