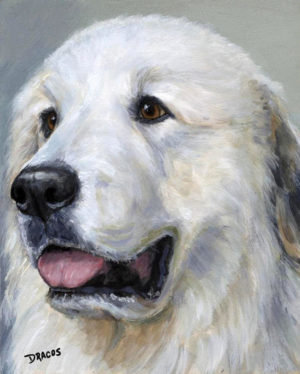 The problem with running a purebred dog-centric site is in making the assumption that what is “old news” for us is “old news” for everyone. Not so. We are constantly adding new readers as friends. Some are fanciers, others are pet owners who love and are interested in their breed. Both are welcomed!

At the risk of boring seasoned Great Pyrenees owners, we dazzle new Great Pyr owners with the fact that the very first time their breed touched American soil was through the Marquis de Lafayette, a military officer who was a key figure in the French Revolution of 1789, and went on to fight in the American Revolutionary War.

Known as the “Hero of Two Worlds” after returning to his home country in December 1781, Lafayette rejoined the French army and organized trade agreements with Thomas Jefferson, the American ambassador to France. His relationship with Jefferson is remembered by purebred dog fanciers for the Briards he brought to Jefferson, but he should also be remembered for bringing the first Great Pyrenees to the United States in 1824, a pair he gave to his friend, J.S. Skinner, who later wrote a book called “The Dog and the Sportsman.” In fact, the dogs that Lafayette brought home were the first breeding pair in the United States.

At the time that Lafayette “discovered” the Great Pyrenees, it was already a favorite among French royalty which called it the “King of Dogs.”  The breed would eventually make its way to England where Queen Victoria owned a Great Pyrenees around 1850.

When Lafayette died in Paris on May 20, 1834, he was most remembered as a symbol of the friendship between France and the United States, but dog people will remember him as the man who introduced two beloved breeds to the United States.