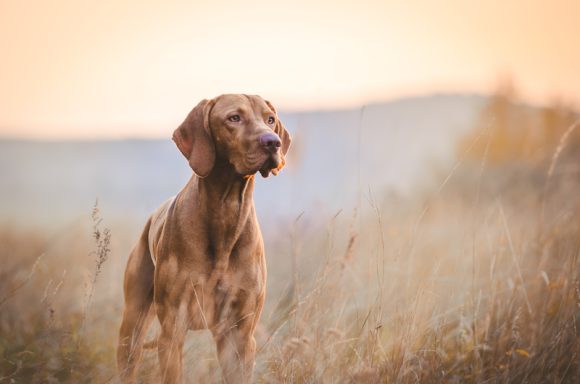 Being a government employee had its advantages, and it certainly helped Emmett Scanlan (a US employee in the Italian Embassy) along with Frank Tallman, to be the first to import a Vizsla into the United States.

“Sari” and two puppies, “Shasta” and “Tito” arrived in Kansas City  in 1950, and they were just the beginning of the many accomplishments the breed would have in America. But more on that further down.

By 1954, there were fifty-one adult Vizslas in the US, and five years later, the first Vizsla was registered with the AKC, a dog named Rex Z Arpadvar bred by Tom Pratt and R. L. Davison, and owned by Marvin Marsh.  In 1960, the Vizsla became the 115th breed recognized by the AKC.

In 1980, the first AKC triple champion of any breed was a Vizsla named “Kai,” something she accomplished by winning in the show ring, the field, and in obedience.  Two decades later,  “Chartay,” aka CH FC AFC OTCH MACH Legacy’s DeChartay UDX(5) MH, another Vizsla, earned the first AKC quintuple championship with the AKC.

In fact, in 2000, Chartay (owned and trained by Jack Sharkey) became the most titled dog – of any breed –  in AKC history.  She earned an incredible five AKC championship titles in different disciplines starting in 1993 when she got her conformation championship title. In 1995, she got her Field Champion (FC) title and Amateur Field Champion (AFC).  Two years later, an Obedience Trial Champion (OTCH) was added to the end of her name, and in 1997 came the Master Agility Champion (MACH) title. Because of her extraordinary accomplishments, she was even given VIP status by American Airlines. Chartay (bred by Dianne Shearer and Gregory Gollick) passed away in 2004 at the age of thirteen.

The Vizsla is one of the top three breeds used by the Transportation Security Administration, and in 2020, “Kajla,” a five year old Vizsla and explosive detection canine was named TSA’s “Cutest Canine” by getting the most likes in a competition on Instagram, Twitter, and Facebook. Stationed at Daniel K. Inouye International Airport in Honolulu, Kajla worked with the Federal Bureau of Investigation, the U.S. Marshals Service, the Bureau of Alcohol, Tobacco, Firearms and Explosives, the State of Hawaii Department of Public Safety and the Honolulu Police Department, in addition to assignments with federal, state and local partners.

We end with a visual treat: Chartay in action: