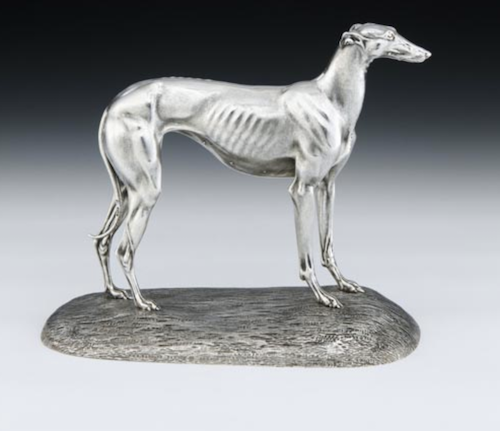 If you know how it feels to find money on the street with nary an owner in sight, you’re going to like this:

As the story goes, someone bought this antique English silver model of a Greyhound because it was a lovely little piece. Maybe they shouldn’t have bought it, but it struck their fancy, and they did. They probably didn’t pay a lot for it.

The buyer had snapped it up at an auction, but the wrong date was listed in the catalog, and there was no mention of the name that was stamped on the bottom: “Cotterill.”  Had they known their antiques, they might have known that the name belonged to Edward Cotterill, the chief sculptor for Garrard, the Royal Goldsmiths. Ledgers survived for the goldsmiths, and anyone could have learned if an object marked by the company was recorded, who ordered it, and how much the piece cost. Anyone looking for the statuette in the ledgers who had the right date, that is. Remember, the date on this piece was wrong. Once the date was correctly identified, the entry in the ledgers was easily found.

Imagine that you’re the buyer of this little sculpture. You come to learn that not only had it been ordered by Queen Victoria, and that it wasn’t just any old Greyhound, but an accurate rendering of “Eos,” her husband’s beloved pet. Victoria had commissioned the sculpture as a present for Prince Albert’s twenty-first birthday when the couple had been married a mere six months, and the statue was the first birthday present that Victoria ever gave him as his wife. In her private journal, she noted that Albert had been very pleased with his gift.

We don’t know how much the lucky buyer paid for the piece at auction, but Stock Number V8048 turned out to be worth over $50,000, and we’re betting they didn’t pay that.