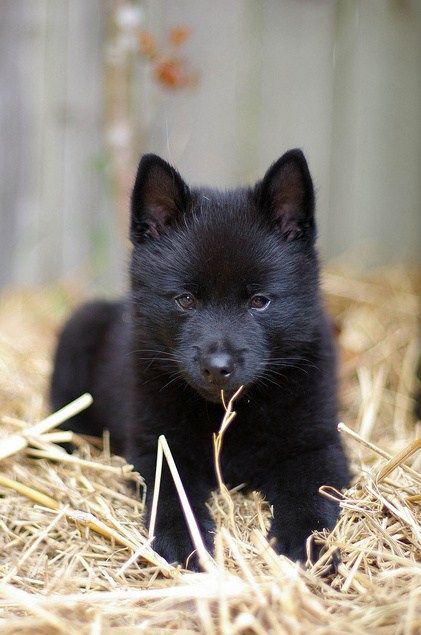 Some sources still suggest that the Schipperke is a spitz, but there is no doubt in the mind of the experts: The Schipperke is a small version of a black sheepdog known as the Leauvenaar. We can thank (at least in part) a 14th century decree by French nobility for the Schip’s development. At the time, France ruled Belgium, and French “betters” dictated that only the aristocracy could own large dogs. As they say, “necessity is the mother of invention,” and regular Belgians went on to create smaller dogs that could do some of the work that larger breeds had done. From the Leauvenaar sheepdog emerged the smaller Schipperke, but also another terrific Belgian dog, the Groenendael, or what some of us know as the Belgian Sheepdog.

Our image, by the way, is of a Schipperke puppy. In another post, we’ll tell you how to the difference between a Schipperke puppy and a Belgian Sheepdog pup. We found this photo on Pinterest and would really like to give photo credit, so anyone?