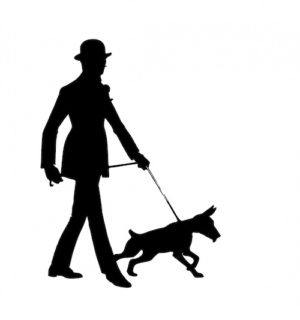 The modern record for a margin of victory in a baseball game was set in 2007 when the Texas Rangers defeated the Baltimore Orioles. Because the score was a lopsided 30–3, it’s safe to say that the Orioles took a pounding.

The kind of pounding we about to discuss here, however, is what happens to a dog whose front assembly or shoulders are too straight, he has short upper arms, and the rear is more angled. The result of such structure is insufficient reach. The leg isn’t able to reach far enough forward to set itself down at the spot, and the front foot hits the ground far too early. The leg “pounds” into the ground before forward momentum is fully spent, and an extra shock is absorbed by the front because the pad acts as a brake. We call this motion “pounding” because the dog puts his foot down with a thud. It creates a jarring motion that is felt in the dog’s entire front assembly, and some dogs avoid it by using the abductor muscles that are used to bend their elbows and lift their lower arms. Ultimately, pounding can lead to a dog being down in the pasterns. It is inefficient movement that is uncomfortable for the dog, and frustrating to the owner who wants to play, hunt, or work with their dog.

Structure matters to all dogs, not just those that enter a show ring. If a dog likes to catch frisbees, go for walks, get up and off a couch, or climb stairs, the quality of his or her life is impacted by how he or she is built. Dogs with poor structure should be loved and cherished, but they shouldn’t be asked to do activities that exacerbate a lack of structural soundness.

To learn more about dog structure, here are some terrific books:

Practical Canine Anatomy and Movement for Judges and Breeders by Claudia Waller, Orlandi, PhD
Dogsteps by Rachel Page Elliott
The Dog in Action by McDowell Lyon
The Art and Science of Judging Dogs by Curtis M Brown and Thelma R. Brown

If you can suggest other books, we’d love to hear what they are!