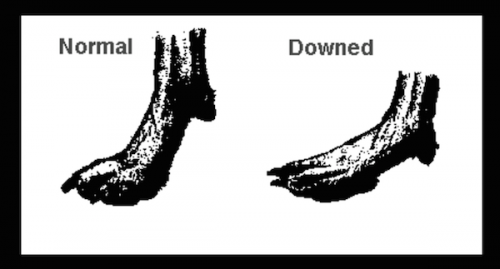 There are 206 bones in the human body, and hands and feet together make up more than half them; 106 are in the hands and feet (27 in each hand, and 26 in each foot). Dog feet are perhaps less impressive in that they have, by comparison, a mere seven bones in their front paws, and six bones in the rear ones, but things “pick up” when we get to their pasterns. The subject, however, warrants more space than we can give it here, so we’re keeping this post really simple. Remember this as you read along.

All dogs have front and rear pasterns (and structure geeks, look away for a moment as we explain where front pasterns are to everyone else). Everyone else, think of front pasterns as a dog’s “wrists,” but only insofar as where to find them on your dog.

Front pasterns are really important whether a dog is a show dog, or a world class couch potato. Why? Because when a dog jumps off the couch, goes up and down stairs, runs “zoomies” in the yard, or takes walks around the block, his or her pasterns absorb the impact of every step. Think of your dog’s pasterns as “shock absorbers.”

Pasterns work together with a dog’s paws to “shock absorb” the impact of running and jumping while providing flexibility of movement. Those parts, however, are only as good as the rest of the dog’s structure. Pasterns bear the burden of a dog’s shoulders and hindquarter assembly as s/he moves, and if the rest of the dog is built poorly, it’s all going to make a dog tire faster, ache more, and be miserable.

A “straight pastern” can absorb most energy, but a small angle is desirable to ensure that the dog’s joint doesn’t knuckle over on impact. The pastern at the left in the picture here is normal, the one at the right isn’t, and we call that one being “down in the pasterns.”

Bad pasterns can be inherited, but there may also be environmental factors: A bad diet and obesity can cause a dog’s pasterns to collapse.In developing puppies, teething and trauma may also come into play. Puppies raised on a concrete surface or who aren’t getting enough exercise can be also be susceptible.

Your dog will never complain. It’s your job to recognize if your dog is structurally built to do what you’re asking him to do even if s/he’s “just a pet.” We’ve seen our share of poorly structured performance dogs who love the agility ring, but structurally speaking, will pay a price at some point in their lives. There are other things such dogs can do that will be easier on their body, activities such as treibball.

Structure matters to all dogs because how they’re built impacts the quality of their life, and that should make it matter to their owners, especially people who want to hike, jog, run agility or go hunting with their dog.  We should put at least as much time into learning how our dogs are built as we do into learning about a new app on our smart phone, and more so if we want to our dogs to participate in rigorous events. To learn more, read: The Dog in Action, by McDowell Lyon, Peak Performance: Coaching the Canine Athlete, by M. Christine Zink DVM, PhD, and The New Dogsteps, by Rachel Page Elliott. By all means, if there are other books you can recommend, share them in the comments section!

Image: We’ll happily credit the artist of this image upon receipt of information, but it’s been “floating” around the Internet for ages and lost attribution long ago

13 thoughts on “Your Dog’s Pasterns”