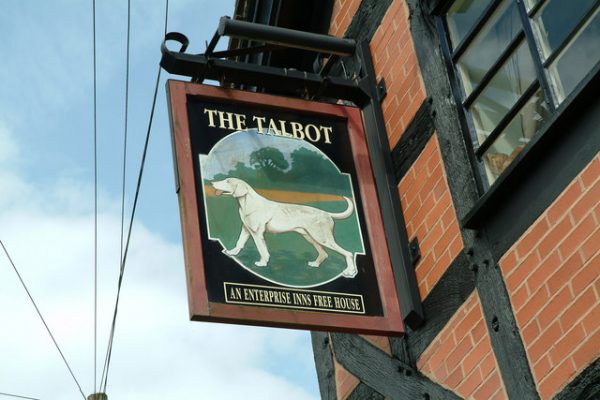 Many hound-owning dog nerds (you know who you are) who love to investigate their breed’s deep history will likely have come across mention of the Talbot Hound, a truly ancient breed descended from ancient mastiffs crossed with Northern and Southern Hounds. This massive, mostly white dog with a big head, pendulous ears, and a broad-nosed was bred for strength and stamina, speed having been sacrificed in favor of a dog said to be capable of bringing down a white stag in the middle of winter. The Talbot had another valuable asset – an excellent nose. Talbots were used to track thieves, prisoners, and soldiers on the battlefields of the Middle Ages. In some countries, only the wealthy and aristocracy could own a dog as valuable as the Talbot, and as testament to his high regard, many family crests featured its image.  In fact, the term, “talbot” is used in present day heraldry to refer to a good-mannered hunting dog.

In its history, Limer, Limer Hound, and Sleuth Hound were all names applied to the Talbot which some cynologists think may have been a variation of the St. Hubert Hound. It’s possible the dog got its name from the Earls of Shrewsbury whose family name was Talbot. They, too, had on their family crest a white hound. In a quotation from 1449, the king referred to John Talbot, the first Earl of Shrewsbury, as “Talbott, oure good dogge”, perhaps as a play on his name, or in allusion to the family badge. On this there is consensus: The Talbot originated in France, was developed in the eighth century, and found his way to England in 1066 with William the Conqueror.

Talbots vanished around end of the 18th century. It’s said that some early dog-shows offered classes for Talbots, but they were never entered, and the classes were dropped.

You may wonder what an extinct breed has to do with your dog, but if you own a Boxer, Basset Hound, Billy, Coonhound, Foxhound, Spanish Hound, Beagle, Harrier, and especially a Bloodhound, you’ve just read a little about a dog that is in your dog’s DNA.

The image of the Talbot pub sign is from a public hound found on Worcester Road, Hartlebury. It should be noted that although the breed has been extinct for a long time, there are still hundreds of pubs and hotels named after it. The image was found on Wikicommons which noted that it was taken from the Geograph project collection, and that the copyright is owned by P L Chadwick and is licensed for reuse under the Creative Commons Attribution-ShareAlike 2.0 license.