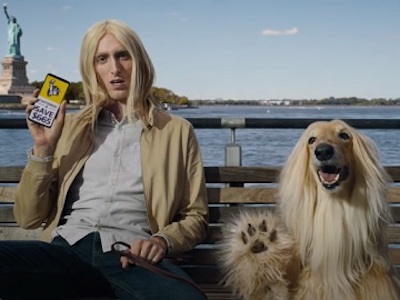 What we’re used to seeing for an Afghan Hound is this kind of role:

The human actor in the first commercial is Dustin Ingram, but once again, information on the dog is scant. We wonder when the powers-that-be will realize that many of their viewers and potential customers actually do want to learn more about the dog in their ads….

As for our post title, “Talk to the Hand,” it comes to us from the 1990s. The slang expression started out as a sarcastic way to tell someone they weren’t terribly interested in hearing what the other person had to say. Admittedly, it has little to do with the dog or the commercial, but it seemed fitting for the “paw-up” scene…..

5 thoughts on “Talk to the Hand”