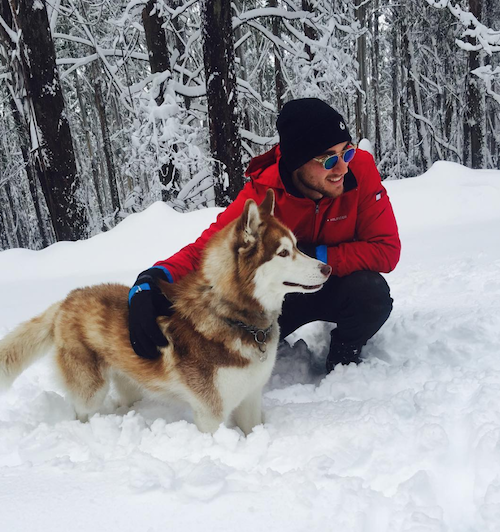 Australian Rules Football isn’t for sissies. During general play, players can be anywhere on the field and use any part of their bodies to move the ball, and they do it through kicking, hand-balling and running with it.

Ryan Schoenmakers is an Australian rules footballer who plays for the Hawthorn Football Club in the Australian Football League (he’s number 25), and his running partner to stay in shape is a Siberian Husky named “Ralphy.” “His energy levels are extremely high so the house can get pretty trashed,” says Schoenmakers. “He runs up and down the hallway as fast as he can, that’s his little burst of energy, and he gets pretty excited when people come over…Being a Husky, he howls, but now whenever I play the song Big Bad Wolf (by Duck Sauce) he just howls all the time. It started I think when he howled at the wolf that goes off in the middle of the track, but now he just starts straight away.”

You can see more of Ryan and “Ralphy” on his Instagram page.

*The term, “19th Man” refers either to the spectators acting as the reserve player the roster of 18 players starting the game, or a reserve player who could enter the game only if one of the original 18 left the field and didn’t return.