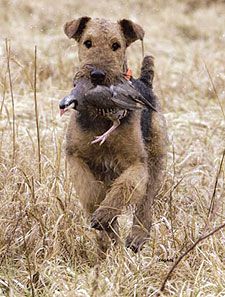 The Airedale in this image which might inspire some of you to say, “Silly NPDD. The Airedale isn’t a hunting breed.”

Someone tell the American Kennel Club. In 2009, the AKC listed the breed on its list of breeds recognized as gun dogs and eligible to earn AKC Hunting Test Titles. As the parent club writes on its website, “The Airedale Terrier’s hunting ability has been documented in hunting journals since the early 1900’s. In the May 1909 issue of Country Life in America, Airedales were described as “having a very strong hunting instinct, with few dogs better equipped for shooting over in the cover or in the open. The Airedale’s speed, endurance, and imperviousness to climactic conditions fit him for bird hunting. He loves the water and can stay in it by the hour on the coldest winter day…making an ideal dog for snipe or to retrieve ducks and geese.”

This Photo appeared in Gundog magazine and was taken by Chris Halvorson, a professional photographer shooting under the business name “DogAds Photography.”  We have his kind permission to share it. The dog owned by Steve Gilbert is “M. J. Night Watch Traymar Brave One, CGC, JHF, JHR (“Braedon”) at 11 months of age at the 2005 Airedale National Hunt Test; it was at this test that two AKC spaniel judges remarked that Braedon would have turned heads at any AKC spaniel hunt test.”