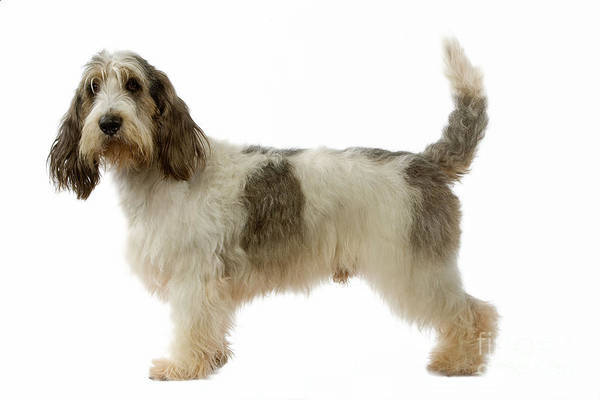 The rough translation of the Grand Basset Griffon Vendeen’s name is very descriptive of its appearance: “Large, low, shaggy dog of the Vendéen (a region of France), but if you’ve been pronouncing “Vendeen” as “Ven-DEAN,” you’d be wrong.

The breed could rightfully answer to “all terrain hound,” as well.  The GBGV used to be a peasant’s hunting dog purposely bred to have short legs so that it could follow it on foot. Grand Basset Griffon Vendéens typically hunted in packs, and despite its loveable  homely look,  it’s actually a very fast hunting dog on hares and boars. The breed is still used today in France, and is especially favored in the south of France where shotgun hunting is very popular. Indeed, it was a team of Grand Bassets that won the 5th edition of the European Cup for hare. Not surprisingly, a GBGV can not become a champion in France without a working ticket as proof of his or her use in the field.

This noble French hound is a serious hunting dog descended from the Canis Segusius, a griffon-type dog used by the Gauls. Also in its ancestry is the Saint Hubert Hound crossed with a white and tawny Italian bitch. The resulting puppies were known as the King’s White Dogs. With the introduction of Nivernais Griffon an a bit of setter blood, the dogs now had added stamina and endurance.

The first GBGV to come to the United States came in 1990, and the first litter was born in 1994.  Many lines today still incorporate current and modern hunting lines, but an almost aristocratic carriage makes the GBGV a stand out in a show ring, as well.