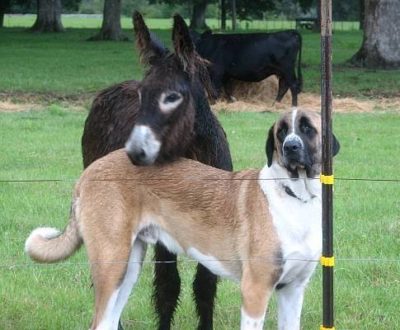 In an Anatolian Shepherd, all color patterns and markings are equally acceptable, and one of those markings is “Dutch Markings.” It’s a symmetrical break of white occurring between solid color portions on the dog’s body and head, and it’s called “Dutch Marked” if it has a white blaze on its face and a white collar around its neck. If this sounds familiar to some of you, it may be because the designation, “Dutch Marked” in the Anatolian is what is called “Irish Marked” in other breeds. There is the thought that the allele for this marking may be additive as it’s thought that dogs homozygous for this marking have irregular white patches on their bodies, with the number and size of these patches being extremely variable.

Color is an interesting topic in guardian breeds. Most of us assume that shepherds choose dogs based on ability, not color, but there is a strong case for using dogs that match the color of the stock they’re protecting so as to blend in and deceive predators, and white LGS protecting white sheep come to mind.  Note, however, that in this picture, the Anatolians blend in with the goats quite nicely. How to explain, then, Dutch Markings? One thought is that the increased mobility of the Turkish people led to a blending of gene pools from which interesting color patterns emerged. As we are not geneticists, however, we welcome input on the topic from those who know more!

This a very, very impressive dog that moves with incredible agility given its size. An Anatolian will move like a big cat stalking prey: Its body, head and neck will align in a straight line as the dog takes long, lithe steps that give the impression of tremendous power. Briefly put, this is a profusely muscled dog that’s nimble on foot.

Check out the brief video below that comes from Conservation South Africa; it gives a glimpse into the effectiveness of the breed as predator control:

The only image we could find illustrating the Dutch Marking on an Anatolian was found on Pinterest, and we’re happy to credit the photograph above upon receipt of information.