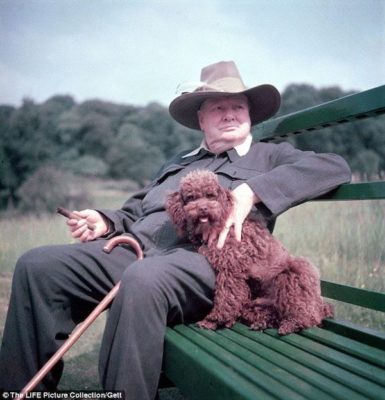 Though Winston Churchill was often associated with Bulldogs, he was actually a Poodle man.

His first Poodle, “Rufus,” died after being hit by a car in 1947. Within a few months, Churchill had been given another Miniature Poodle whom he named Rufus II.  This Rufus not only ate off a cloth laid on a Persian rug in the dining room, but was served his meals before the Churchills were (and by a butler, no less).  As if to cement Churchill’s “Poodleness,” the splendid cake that was served to Churchill on his 79th birthday was crafted to resemble a stack of books that the Prime Minister had written, but on the top of the cake was a sugary version of Rufus climbing up a candle to reach a cat at the top.

Image of Churchill with Rufus in a photo taken in 1950 is from an article you can read here.