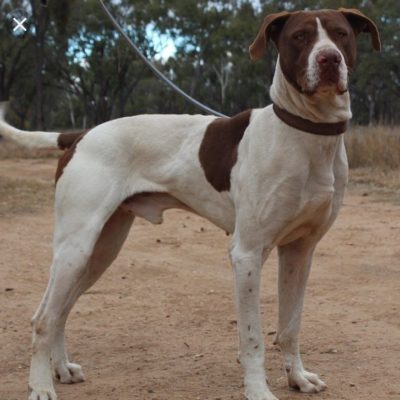 In as much as our mandate is education about purebred dogs, we occasionally post information that may or may not be about an actual “breed,” per se, and we tend to let our readers decide.

In the course of research about hog dogs, we came across the Bull Arab, a dog developed in Australia around 1972 by Mike Hodgens to track, chase and deal with wild boars by pulling them to the ground and holding them by the ear until hunters arrive.  These dogs have an acute sense of smell and can locate feral pigs that are nearly 4 miles away. In fact, excellent tracking abilities have made Bull Arabs useful for Search and Rescue work. When one sees the breeds that went into its development, it makes sense.

Originally, Bull Arabs were 50% Bull Terrier,  25% Greyhound for speed, sight and athleticism, and 25% German Shorthaired Pointer for scenting, intelligence and silence while hunting.  Some believe that the English Pointer was used instead of the German Shorthaired Pointer, as well as the Saluki (which accounts for the name, ” Arab”) instead of Greyhound. A later line called the Paulsen Bull Arab after its creator, Peter Paulsen, included nearly 13% Bloodhound to add stamina and tracking ability.

Its said that Hodgens stopped breeding Bull Arabs in 1981, and all other dogs in 1989. He evidently went through difficulties to create the Bull Arab, but we didn’t come across information as to what those difficulties were.

Bull Arabs are described as loyal and even-tempered dogs who are friendly with familiar adults and children, but they are working dogs with a high prey drive who are designed for an active lifestyle; they are dominant and potentially aggressive hunters, and as such, Bull Arabs should only be taken on by positively assertive and experienced owners.

It’s important to note that while the breed has a reputation for aggression, there is a little hard data to support the charge. A source we found cited that reports supplied by 80 New South Wales councils and passed on to the Department of Local Government between 1 July 2005 and 30 October 2006 detailed several attacks attributed to Bull Arabs,  but the same report also show many other breeds with a greater number of attacks.

In terms of popularity, the Bull Arab is established as the number one Pig Hunting breed in Australia, and there is an effort in that country to get these dogs recognized as a registered breed. The same organization behind that movement wants to protect owners who want authentic Bull Arabs, and not poorly bred dogs. To that end, the group is pushing for DNA testing as a sole method of verification. Critics say that DNA testing is not sufficient, however,  and will create too many variables.  Time will tell if the Bull Arab will move to official recognition, and our sense is that it has a long way to go. For now, we wanted you to know about the Bull Arab – also known as the Australian Pig Dog – even if it’s almost never seen outside of Australia.