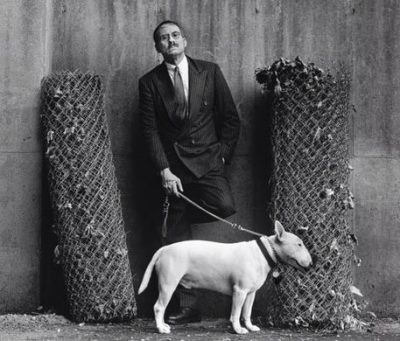 It seems appropriate to follow a post about Jack the Ripper with one about a crime novelist, and fans of that genre will recognize the name, James Ellroy. Known for a style of writing called “telegrammatic prose” (a casual use of connecting words and short, staccato sentences), Ellroy’s best known works are The Black Dahlia and L.A. Confidential; that he made something of himself at all, let alone into a successful novelist, is a credit to him. His mother was murdered (a case that remained unsolved as of 1995), he became notoriously wild, broke into girls’ houses, got heavily into drugs and alcohol.  He described himself as a “homeless alcoholic jailbird” who cleaned up and wrote his way to salvation.

We suspect, too, that dogs helped him along the way. In his words, Ellroy has said, “Dogs are an obsession with me.” Two Bull Terriers, “Barko” and “Dudley” are companions. “Bull terriers have that wedge head. They’re very friendly. They’re very intelligent. They’re very durable. They love humans…they have a tendency to scrap with other dogs. But they’re great. They’re great kids’ dogs. They’re just beautiful, beautiful animals.” We don’t disagree!