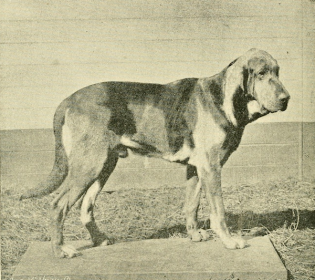 Edwin may have been ahead of his time, but his ideas made him the object of mockery and ridicule during a decidedly serious time in London history: The capture of Jack the Ripper. A pioneer in the breeding of Bloodhounds, Edwin Brough established the Bloodhound Association, and while his dogs were famous, Londoners thought the notion of using dogs to track down a serial killer was antiquated (read: wacky). To add insult to injury, newspaper accounts of the dogs’ search for the Ripper were inaccurate, and were the matter not so serious, the picture of incompetency painted by the media bordered on comedy: One story reported that the dogs had found the wrong man when they hunted down Sir Charles Warren, commissioner of the police, while another sneered that the dogs had gotten themselves lost in a London fog during an exercise.

The idea of using the hounds for the Ripper investigation wasn’t Brough’s, but that of another Bloodhound breeder, Percy Lindley, who wrote a letter to the editor in the The Times: “I have little doubt that, had a hound been been put upon the scent of the murderer while fresh, it might have done what the police failed in…”

The suggestion inspired the Metropolitan Police to experiment with scent dogs, and perhaps buy a pair to be kept at the police department, ready when needed (something Lindley had suggested in his letter).

Edwin Brough volunteered his finest dogs, “Burgho” and “Barnaby,” to test for the Metropolitan Police, and the dogs did well, but false news articles reported that when the hounds were called out to an assignment, they got lost in the fog while tracking -not true. The dogs were actually at a practice drill, and far out of reach by the time police sent for them for the assignment. Another newspaper, a notorious critic of the Police commissioner, Sir Charles Warren, reported that when set loose, the dogs promptly hunted down Sir Charles Warren himself. Also not true.

The police department was also culpable. Having heard nothing back from the police regarding interest in his dogs, Brough got on with his life and took “Burgho” to a dog show, while “Barnaby,” who’d been with a London handler, came back to Brough. Neither dog was even in London when the Ripper’s most grisly murder was discovered: Mary Jane Kelly’s mutilated body spotted through a window. Remembering that the Bloodhounds had been used specifically to hunt for the murderer, a police inspector ordered that the scene not be touched until “Burgho” and “Barnaby”could arrive to get the Ripper’s scent. It was two hours before the officers, the Inspector, and the police surgeon learned that the dogs weren’t even in London and finally broke the door down into Kelly’s flat.

We’ll never know if the dogs could have solved the mystery of the Ripper, but we hazard a guess that had communications been better, they might have. It’s said that Edwin Brough was very suspicious of the timing of events, and noticed that Jack the Ripper had stopped killing while his Bloodhounds were in London conducting their drills, but resumed once they were gone. Their presence or absence was something the public (and the Ripper) would have known through media hype.

In the end, “Burgho” and “Barnaby” set precedence for hounds working with the British police, though it didn’t officially begin until the 1930s.

Jack the Ripper remains a mystery, though theories abound. Author, Patricia Cornwell, believes it was the Impressionist painter, Walter Sickert.  Author, Russell Edwards, claimed to have proved that it was Aaron Kosminski, and most recently comes news that a Victorian diary proves the Ripper was a Liverpool cotton merchant named James Maybrick. Interested readers may want to check out a couple of sites we found here and here.

Photo of CH. Barnaby owned by Edwin Brough. The text under the original photo reads, “Unless taken out for a walk two or three times a day. Keep her warm; do not let her become chilled. Feed her often, anything she craves—boiled mutton, beef broth, with bread and rice, buttermilk, etc. Keep fresh water always by her. Remove any remnant of her food when she is through eating. I have raised eleven and twelve puppies, respectively, in two different litters, from Rose-Mary by this method of treatment.” The image comes from Wikicommons with no known copyright restrictions