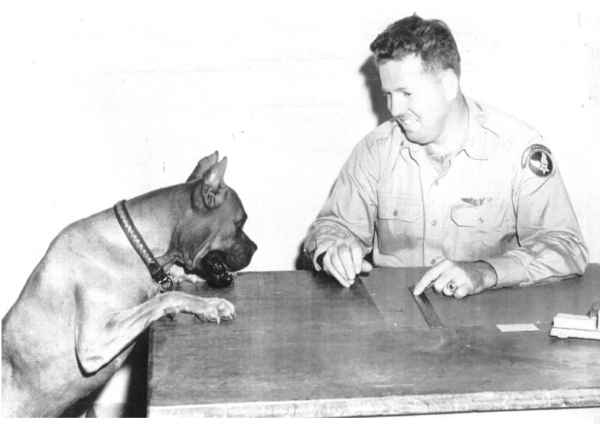 Show of hands: Who knows what the Berlin Airlift was about?

On June 24, 1948,  the Soviet Union severed all road, rail and water links through communist East Germany to the western part of the divided city to retaliate for the inclusion of West Berlin in West Germany’s monetary reform program.  The “Berlin Airlift” that started two days later lasted for fourteen months. In that time, 2.34 million tons of food, coal, fuel and other vital supplies were delivered to Berlin’s 2.2 million citizens. More than 300 planes were used to fly 277,000 trips,  so many, in fact that at the height of the operation, planes were taking off and landing at 90-second intervals.

Lt. Clarence “Russ” Steber, an Air Force pilot, likely holds the record for the most missions flown during the Berlin airlift. He received the Distinguished Flying Cross for flying a record 415 missions during the 318-day allied relief effort to West Berlin, but for all that, it was his Boxer, “Vittles,” ‘that most people remember. In fact, Vittles, holds a record himself: He was the only dog to log more than 130 missions during the Berlin airlift, and by order of Air Force General Curtis LeMay, the dog had his own parachute during the flights on C-47s and C-54s.

Vittles was owned by a friend of Steber’s, and the pilot grew so fond of Vittles during visits that the friend sold the one year old Boxer to him.  When Steber’s missions required him to be away for two to three days at time, he started taking the dog along, and soon other pilots began to fly Vittles on their missions, as well.  Steber remembers that in Berlin, “as soon as we were unloaded, we had to take off again. Sometimes Vittles would be nosing around other airplanes and I had to take off without him.” When that happened, Vittles would catch a ride with other pilots. “”Everybody knew who Vittles belonged to and eventually got him back to me,” said Mr. Steber. “The other pilots would feed him and even take him to the Officers’ Club.”

Word got back to Gen. Curtis LeMay about the dog,  and he summoned Lt. Steber to his office. “Are you the pilot who owns the dog who is flying in our airplanes?” LeMay asked. Thinking that he was in deep trouble, Ste 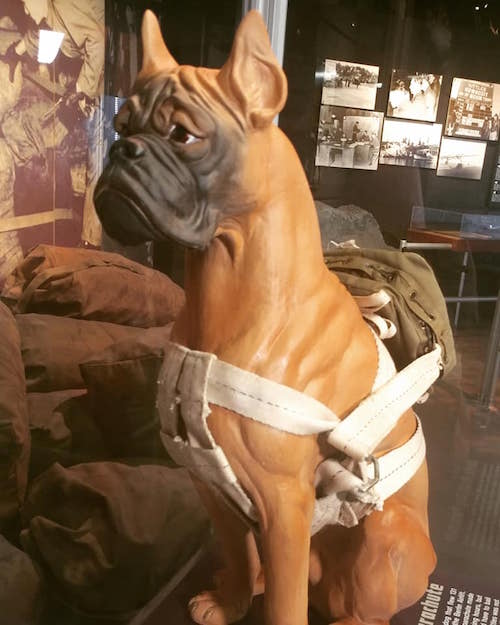 ber admitted that he was, but General LeMay replied, “Without a parachute? That dog is one of the best morale builders that I’ve had over here. I want that dog to have a parachute!”

Vittles soon had a parachute of his own designed with a static cord that was connected to Lt. Steber’s parachute; it would  automatically open the dog’s parachute in case they ever needed to bail out. Vittles never did need to bail, but Steber did. When the C-47 he was piloting went down over Soviet-controlled territory. Steber bailed out moments before his plane crashed. “My parachute opened and I hit the ground at nearly the same time,” remembered Steber. He was knocked unconscious from the impact, captured by the Russians, and for three days, interrogated and “roughed up.” When he couldn’t provide information, he was released, and thankful that Vittles wasn’t with him on the flight.

Sadly, Vittles contracted heart worm from a mosquito bite at Biggs Air Force Base, now known as Biggs Army Airfield. Veterinarians couldn’t help him, and at the age of six, Vittles died. News of his death was reported on the front pages of the El Paso Times and the Air Force Times, as well as on the local television news. The beloved mascot of all who participated in the Berlin airlift was buried on the grounds of Biggs AFB.  The parachute made for him – the only one ever made by the Air Force for a dog – is now on a dog mannequin at the National Museum of the U.S. Air Force in Riverside, Ohio.

You can read some of Vittles’ close calls here.