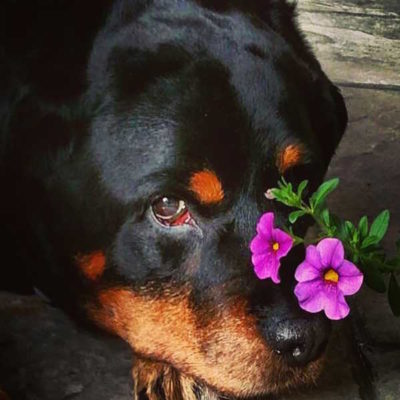 One of the oldest surviving herding breeds in the world is the Rottweiler, a breed whose ancestry is believed to extend all the back to ancient Rome.  Cynologist believe that Romans wanting to extend their borders north to the Danube River conquered the area of what is today is known as Rottweil, a town in southwest Germany in the state of Baden-Württemberg. They brought with them dogs that were used to move cattle that fed the Romans. Debate continues between those who think that the original dogs were Molossus/Mastiffs, or a dog we’d classify today as part of the Pinscher/Schnauzer family; the AKC breed page writes that the Romans utilized Asian mastiff types to develop the distant ancestor of today’s Rottweiler. Whatever the true genetic origins of the breed, it was brought to Rottweil where it most probably crossed with native dogs.

The town in which the Romans settled was transformed into a fortified village, the roofs covering new structures made of the area’s red-colored clay. The settlement that sprang up came to be known as “das Rote Wil” – “rot” for the red tiles, and “wil” from the Roman word for “villa.”  In time, the town came to be known as “Rottweil.”

The dogs continued to move herds from pasture to market, and to protect stock, owners and goods from thieves and rustlers along the way. It was for this reason they earned the name Rottweiler Metzgerhund, or Butcher’s Dog of Rottweil. As one old story goes, drovers who’d sold their cattle after the long drive headed to the bier Keller (or beer cellars) to celebrate. Before tilting the first beer stein, however, the men were wise enough to tie money from their sales around the dog’s neck. No matter how drunk the drovers got, they knew their money would be safe until they woke up in the morning.

In the mid 1800s, the breed found itself without a job. Railways and paved roads changed how livestock was brought to market, and herding dogs became redundant. Rottweiler numbers dwindled, and it’s said that at one point in 1905, only one female Rottweiler remained in the area. Had it not been for a small group of dedicated breeders from Stuttgart, the breed might have vanished.  By 1907, there were two separate clubs for Rottweiler appreciation in Germany, and in 1910, the German Police Dog Association recognized their value in police work. This led to their use as personal protection dogs, as well.  Thirteen Rottweilers were part of the German army of war dogs.

The first Rottweiler is believed to have been imported to the United States in the 1920’s, and in 1931, the breed was recognized by the AKC.  Despite official recognition by both the AKC and UKC, the Rottweiler’s popularity grew slowly, and the breed was relatively uncommon until the 1980’s.

It’s possible that the 1986 movie, Ferris Bueller’s Day Off  brought notice to the breed, but more likely, people came to discover that there was little a Rottweiler couldn’t do. Rotties were among the first guide dogs for the blind, and, in more recent times, their roles expanded even more. “Fargo,” is a scent detector trained Rottweiler who helps locate whale scat samples in the North Atlantic,  and Rotties have been rediscovered as herding dogs. Rottweilers are now working stock on farms and stations throughout Australia where the breed’s natural gathering style and strong desire to control are much appreciated. When necessary, Rotties work well off stock and physically force a stubborn animal to do what the dog wants by using his or her own body. At the same time, the dogs are remarkably inhibited in using their mouth on stock, relying instead on a nip with the front teeth (not the canines) when necessary. It’s been reported that some ranchers have found that Rottweilers are better at moving recalcitrant animals that simply ignore Kelpies, Australian Cattle Dogs, or Border Collies. Check out Gary Gleeson’s terrific article which appears on the National Rottweiler Council‘s website.  Also, take a look at the documentary, “Black Beauty Breed” that shows Rottweilers herding.

Rottweilers distinguished themselves as search-and-rescue workers at such disaster sites as Oklahoma City and the World Trade Center, and dogs like Dave have helped be nursemaids to orphaned animals. They’ve appeared in movies, and been the subjects of beloved books. Good news came in 2016 when the AKC reported that Rottweiler was the eighth most popular breed at the time, its highest ranking in breed registrations in 20 years.

Famous owners have also brought attention to the breed.  Will Smith and his wife, Jada Pinkett Smith, own four Rottweilers, and in 2012, musician, Bruno Mars, introduced his Rottweiler puppy, “Geronimo,” via Twitter.  Hayden Panettiere, best known for her role in the Heroes TV series. is a Rottie owner, and Tulisa Contostavlos, a judge on the TV show,  X Factor has been seen visiting the contestants in their homes with her Rottweiler in tow. Leonardo DiCaprio owned “Baby, ” a beautiful Rottweiler, and Robbie Williams, English singer and songwriter, includes among his dog family “Missy,” a Rottweiler.

Perhaps the best way to conclude is with the late “Wynd,”recipient of the AKC Humane Fund ACE Award in the Therapy Dog category in 2015.

One thought on “A Snippet of Rottweiler History”