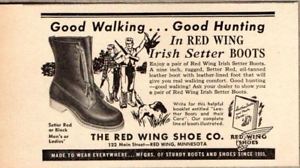 In 1950, the Red Wing Shoe Company introduced Style #854, the first of many boots that would come to be known as the “Irish Setter.”  Designed specifically for hunting, the boot featured the distinctive Oro-Russet leather, the same color as an Irish Setter which was created by dying the leather using a bark extract from giant California redwoods.

The Irish Setter® has endured! The company is now the official upland hunting boot sponsor of Pheasants Forever and Quail Forever,  and co-sponsored the 2017 Bird Dogs for Habitat campaign, an online fundraising contest for members and supporters to vote for their favorite breed of bird dog (the German Shorthaired Pointer handily beat the other breeds in the vote). They also ran a Bird Dog ID Contest on Facebook, and assorted other events that recognize purebred bird dog breeds. Kudos to Red Wing Shoes!