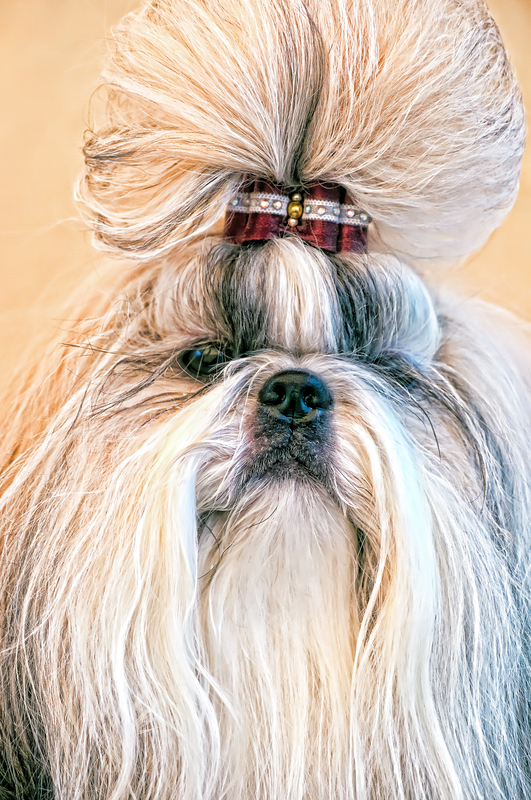 It takes skill to create a Shih Tzu‘s topknot (properly pronounced SHEED-zoo), and as the Shih Tzu is a head breed (according to the parent club), it’s important to get it right. That said, as with any coated breed, one needs to examine the head with one’s hands to properly evaluate what’s really going on under the Shih Tzu’s “bubble” (a teased top knot that gives the head a round and broad appearance).  Writer, Jo Ann White, says that the Shih Tzu’s head is “a complex collection of recessives,” but hairspray, teasing, and rubber bands can create illusions making a hands-on examination even more important.

Over the years, there have been varying degrees of presentation in the Shih Tzu, and topknots have reflected different trends of shapes and styles. Fifty years ago, a Shih Tzu’s head coat was simply held up by a single elastic band, and by the late 70s, a modest bow was added to draw attention to a beautiful, large, round head.  Falling into the trap of “more is better” thinking, however, some groomers went to the “nth” degree, and topknots became so exaggerated that they distracted, rather than enhanced,  the breed’s beautiful, round head. Back combing, increasingly complicated bows, more bands, more teasing –  more everything – sometimes made the dog look like a contestant for a grooming show, and not a dog being evaluated for his conformation.

Indeed, in 2016, new Kennel Club guidelines read: “It is strongly recommended that the hair on head is tied up without adornment.” In essence, it was to stop people from showing Shih Tzus with bows in their topknots. The Shih Tzu judge, Pat Maule, even announced on Facebook that no dog would be considered for Crufts Best in Show if they broke the rules, and added: “Bows and/or any other adornments will not be permitted in the ring. Plain elastic band holding the topknot only please.”

This didn’t sit well with some exhibitors, some of whom felt that bows were irrelevant when it came to judging the dogs, and others who contended that putting bows in the top knot was a long held tradition. Others appreciated the advance “heads up” of the judge’s preference for “no bows.”  In a bit that appeared in Dog World, judge Maue explained that in her opinion, bows could be used to hide faults from a judge.

Many experienced breed judges had learned that by cupping the dog’s head in their hands, and using their thumbs to feel the whole head by getting under the topknot, they could get a sense of the broadness of the skull, and a feel for the correct round dome. The breed standard, after all, calls for a head that is “round, broad, wide between eyes, its size in balance with the overall size of dog being neither too large nor too small.” Furthermore, a narrow head is a fault. Indeed, the standard also offers the instruction that “care should be taken to look and examine well beyond the hair to determine if what is seen is the actual head and expression rather than an image created by grooming technique.”

Some optics are created by the dog’s own genetics, and those are the “racing stripes,” slang for the two strips of color that run from the roots of the hair over dog’s eyes all the way to the ends of the coat gathered in the topknot. Again, getting hands on the dog’s skull determines if the head is narrow or broad.

As far as we can tell,  the bow/no bow fuss may be subject to the exhibitor’s country of origin. Most Shih Tzu exhibitors in this country don’t regard the bow as a way to “hide faults” since a good judge can quickly tell a good head from an incorrect head whether the dog is wearing a bow or not. Others shrug their shoulders and concede that a judge has the right to determine how to conduct their breed, and in Pat Maule’s case, she had the backing of the Kennel Club.

What say you, Shih Tzu owners?