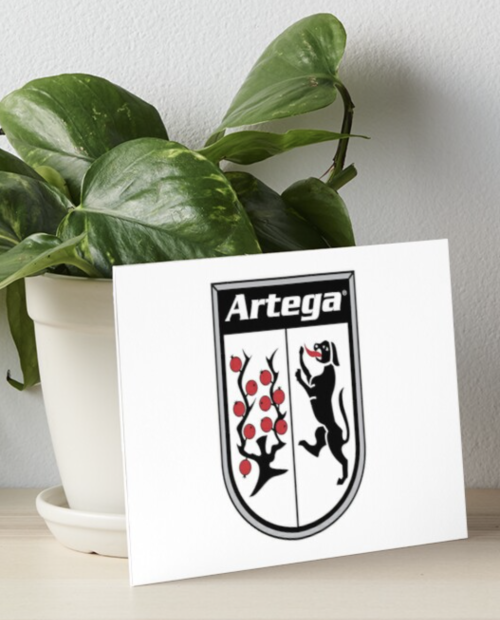 As common as dogs were in archaic heraldic emblems, coats of armor, and flags, they’ve rarely been used as a symbol in modern car branding.

Historically, the first auto emblems were intended to reflect the speed and power of a vehicle, and because the unit of measurement of power for a vehicles was “horsepower,” more than a dozen makers had a horse as part of their branding, the most famous being Ferrari and Porsche.

It didn’t take long for marketers to realize that (figuratively speaking), drivers came to see their “home on wheels” as their alter ego, or what they wanted it to be. Jaguars, cheetahs, lions and leopards – sleek, elegant big cats that symbolized power, grace, and speed – were soon seen as hood ornaments or in advertising material.

And then you had Mack, Lincoln and Artega. These auto makers chose a dog for their branding. As they saw it, man’s friend symbolized reliability, and in the case of Mack designers who chose a Bulldog for their trucks and cars, toughness. Lincoln used a hound, a bronze figure covered with silver that faithfully served as the emblem of the famous Lincoln concern for 14 years.

Very few people outside of Europe are familiar with Artega.

Klaus Dieter Frers founded Artega, a car manufacturing company, in 2006, the brand headquartered in Delbrück, Germany. The company’s mandate was to produce sports cars that included all the bells and whistles of modern technology. Unfortunately for them, the company implemented only one of its ideas in the Artega GT,  but it included the largest amount of know-how all at once. Total production was only about 130 cars, but the two-seater coupe drawn up by former Aston designer, Henrik Fisker, was pitched as a rival to the Porsche Cayman. The company filed for bankruptcy in July 2012, but it left a mark on the history of the automotive industry.

Even now, many motorists recall the logo: A heraldic shield divided into several segments with a stylized image of a dog standing on its hind legs, ready to defend or threaten opponents. A fiery red tongue served as a stylized exclamation point. Sadly, a great logo wasn’t enough to save the company from closing.

We honestly don’t know what breed is supposed to be signified by the dog. We think it’s a Puli out of coat, but that’s just us.

2 thoughts on “The Dog in Auto Branding: Only Three”