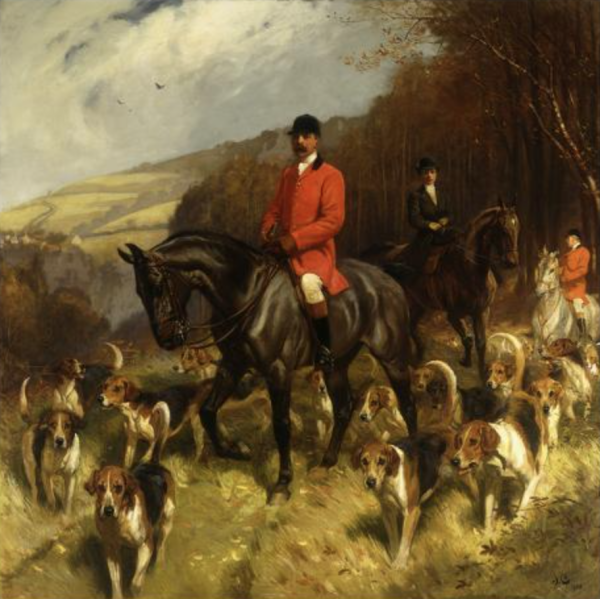 Researching purebred dogs is a lot like the children’s book, “If you Give a Mouse a Cookie.” In that story, often described as a “circular plot,” each action leads to a reaction, or in our case, each new discovery leads to something else we didn’t know and have to look up. We fall down a lot of rabbit holes.

Glancing through an old dog book, we came across the term, “Prudhoe and Derwent.” The very helpful (not) definition was, “Braes of Derwent.”

See what we mean?

We learned that Braes of Derwent is a hunt that takes place in the scenic rolling hills and patchwork fields of Northern England in the Durham and Northumberland region. According to the Masters of Foxhounds Association, the present hunt dates back to 1854, but the earliest record of hunting in the county goes back to 1670 when a Captain Robert Hutton hunted his Houghton-le-Spring hounds. Later, upon the death of a Mr. Humble (who remains a mystery to us), the pack became known as the Prudhoe;  In 1837, it became known as the Prudhoe and Derwent.

In 1943, when the old North Durham Hunt was dissolved, it was incorporated into the Braes of Derwent. In 1945, the Hunt became a “subscription pack.” Once again, we had research what a subscription pack is, and not totally surprisingly, it is what it sounds like: A subscription pack is a hunt in which members pay a fee to hunt with hounds owned by a club or a hunt committee. This isn’t a “British thing.” The Nantucket-Treweryn pack in Berryville, Virginia, for instance, is a subscription club, and in this case, it also means that members pay to keep it running.

These days, the Braes of Derwent meet twice a week on various days from September to early March.  It hunts within the current law of England, and lays trails for its hounds to follow whilst covering various terrains across the country. Supporters follow both on foot and in vehicles.

As an aside, the area covered by the Braes of Derwent is also the home of the Northumberland and Durham Labrador Retriever Club founded in 1923, and first registered with the Kennel Club Ltd. in January 1925. It is the second oldest Labrador Club in existence and celebrated its 90th Anniversary in 2013.  The website has marvelous historic images and is well worth a visit by Labrador Retriever fans.

Image: Mr and Mrs Lewis Priestman on Hunters with the Braes of Derwent Hunt in a Landscape” by John Charlton is available as a print here.