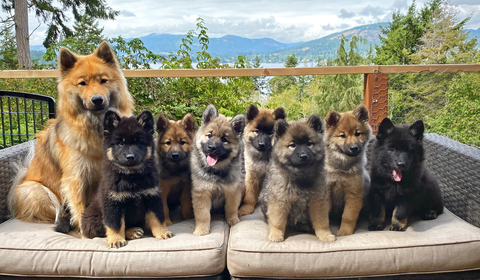 On the list of breeds named after a location, one breed is sometimes forgotten. Ironic, since this breed is named not for a border, city, region, or even country, but for two entire two continents, Europe and Asia.

The creator of the breed, Julius Wipfe, initially wanted to name his creation the Wolf Chow, but in 1973 when the German Kennel Club  (VDH) and the Federation Cynologique Internationale (FCI) both agreed to officially acknowledge the “Wolf-Chow,” they insisted that the name be changed. The German Kennel Club objected (rather strongly, in fact)  because it felt that “Wolf Chow” too closely associated the new breed with the ancient German Wolfspitz, and it didn’t help any that many club members weren’t fond of Wipfe’s new breed to begin with. To make everyone happy, Julius Wipfel renamed the breed, “Eurasier” thinking that the new name emphasized its Asian and European root stock. Not everyone caught on, and some people referred to the breed as the Eurasian. Depending upon the registry, the breed today is known by both, Eurasian by the FCI, and Eurasier by the UKC, AKC, and the Kennel Club.

Image of Mama Eurasier and her pups shared with consent of their owner,  Marissa Armstong/Cerasi Eurasiers