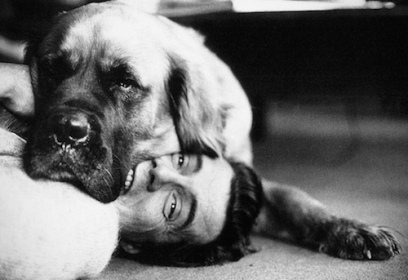 In 1958, he was the biggest draw at the British box office, attracting bigger audiences than Marlon Brando, Frank Sinatra, Marilyn Monroe, Audrey Hepburn and Elvis Presley. In fact, he was called by some the “British Rock Hudson.” He made 35 films by the time he was 40 years old, and many of them were gutsy roles not chanced by other actors of his generation. His achievements didn’t end there. A British subject, he was the first Brit ever to serve as president of the jury at the Cannes Film Festival, was awarded a Chevalier De L’Ordre Des Lettres from the French Government in 1982, received an honorary Doctorate of Literature in 1985 by St. Andrews University in Scotland, wrote seven volumes of autobiography and seven novels,  all becoming best-sellers, oh, and he was knighted by Queen Elizabeth II in 1992. His name was Dirk Bogarde, and he was what many felt was the finest, most complete, actor on the screen. He was the owner of purebred dogs, as well.  In Snakes and Ladders, he wrote of his joy in walking his Corgis, “Sinhue” and “Bogie,” and his Mastiff, “Candida,” all of whom took turns warming Ava Garner’s bare feet. After visiting Bogarde at his home, actress, Kay Kendall, insisted that her husband, Rex Harrison, buy her a Corgi of her own. It worked.