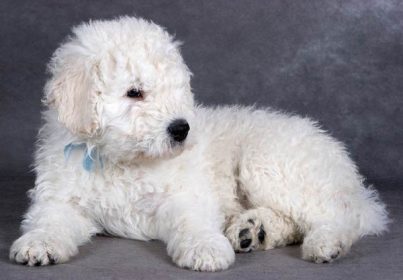 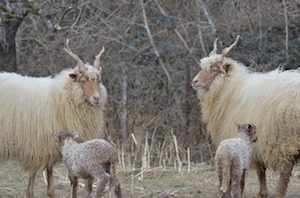 The Komondor’s corded coat is multi-purposed. It helps the Komondor blend in with the flock, allows the dog to be more readily accepted by the sheep by resembling them (traditionally Racka sheep), fools predators about whether the flock is guarded or not, and protects against bites should a Kom encounter a wolf. It also allows shepherds to easily make a distinction between Komondorok and the typically gray or black wolves of Hungary should the latter attack flocks at night.

Komondorok, however, are not born corded as seen in the thumbnail image above of a Komondor puppy shared from the AKC website (with permission). A Komondor is born fuzzy and white, it’s puppy coat becoming longer and wavy/curlier as it moves into the juvenile period – usually between the ages of eight months and twelve months. We liken this period to one experienced by the Puli (and what many corded dog owners refer to as the “unmade, lumpy bed state) – a time when the woolly undercoat “merges” with the harsher, curlier outer-coat to form mats. The curl of the outer-coat helps determine the natural separation points, and “clumps” of mats are separated by following the pattern of the curls. With age, the mats grow longer, often thinner, and become the magnificent corded coat seen on the dog below: 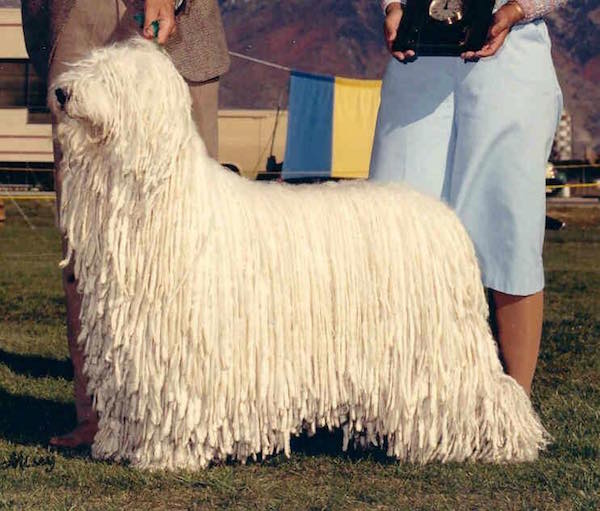 Each “cord” in this dog’s coat is separated to the skin, and there are easily thousands of them on an adult dog. While this magnificent dog is obviously a show dog, a working Komondor still has a corded coat, albeit one that is not as white, evenly split, or as long. The AKC breed standard even indicates that failure of the coat to cord by two years of age is a disqualification because it’s important to be able to distinguish the Komondor from other white livestock dogs at a glance. That said, it’s rare to see a Komondor coat that won’t cord at all.

Image of adult Komondor is of “Pooh,” photo kindly shared by Nancy Leibes