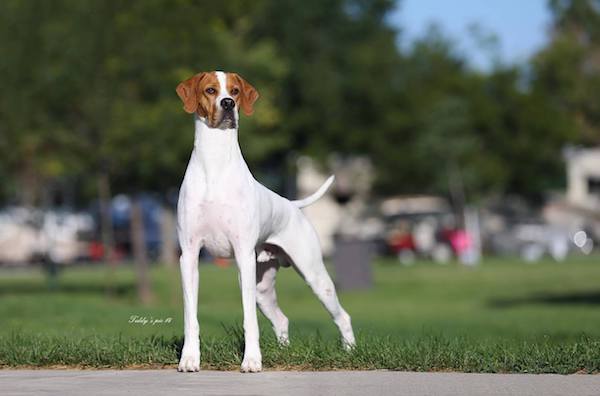 The American Kennel Club and Canadian Kennel Club lists the breed as the Pointer, and both the Fédération Cynologique Internationale and United Kennel Club catalog the breed as the English Pointer, but the breed is thought by many canine historians to have originated in Spain. This is likely because Pointers are believed to have descended from from Spanish Pointers which came to England some time before the 1600’s, though some experts place that time closer to 1713, ancestors of the breed having come home with British army officers at the end of the War of Spanish Succession.

Most cynologists are in agreement that along the way, an infusion of Foxhound, Bloodhound, and Greyhound were used to “fine tune” this elegant breed, and possibly some other breeds, but as no records were kept of any of these crosses, the theories about what other breeds were introduced are based not only on anatomy and similarities in temperament, but what breeds were commonly present in England over time.

That the Greyhound would be part of the ancestry makes sense when we learn that back in the day, Pointers first worked with Greyhounds.  The Pointer was used to find and locate game by pointing or flushing, and the swift Greyhound would chase down and dispatch the game, usually, hares, rabbits and/or fox.

The Pointer only grew in popularity with the use of guns. hence its nickname: The Cadillac of Bird Dogs

Image of “Dexter,” a Pointer we’ve met several times, and yes, he really is that gorgeous. Shared by Jolene Jontz Krohn, photo by Teddy Lei