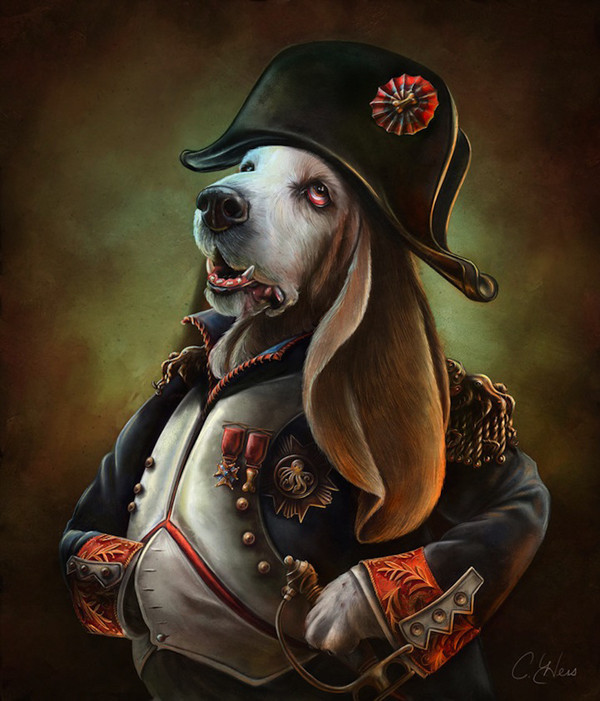 Napoleon Bonaparte had a rocky relationship with dogs. History alternately reports his displeasure with them, but also some admiration.

One supposes that like all of us, Napoleon was shaped by his experiences. A Pug named, “Fortune” didn’t help dogdom when he inserted himself into Napoleon’s marriage to Josephine (to whom “Fortune” belonged). To be precise, “Fortune” bit Napoleon’s leg when he climbed into bed on the night of his wedding to Josephine in 1796 leaving a scar. A few years later, a dog compounded the humiliation of the French general and emperor when his navy was famously defeated by the British fleet in the historic Battle of Trafalgar. Details of the battle were explained to Napoleon, including the fact that a Newfoundland serving as the mascot on the frigate HMS Nymph, was the first member of the triumphal boarding party to reach the deck of the surrendered French warship, The Cleopatra. ‘Dogs! Must I be defeated by them on the battlefield as well as in the bedroom?’ Napoleon thundered.

Conversely, Napoleon was forever haunted by a scene he witness on a moonlit field after a battle: A dog stood beside the body of his dead master, licking his face and howling. He later wrote, “This soldier, I realized, must have had friends at home and in his regiment; yet he lay there deserted by all except his dog. I looked on, unmoved, at battles which decided the future of nations. Tearless, I had given orders which brought death to thousands. Yet here I was stirred, profoundly stirred, stirred to tears. And by what? By the grief of one dog.”

When Napoleon had been exiled to Elba, the majority of French courtiers whom he had thought would stay loyal to him didn’t follow. After he escaped Elba, he later told the courtiers: “There are two kinds of fidelity, that of dogs and that of cats; you, gentleman, have the fidelity of cats who never leave the house.”

The statement might never have been made were it not for a dog. During his escape from the island in 1815, Napoleon was pitched overboard by choppy seas. A poor swimmer, he would surely have drowned had a fisherman’s dog (thought to have been a Newfoundland) not jumped in after him and kept him afloat until he could reach safety.

One the one hand, Napoleon wrote, “If you do not like dogs, you do not like ﬁdelity; you do not like those who are attached to you; and, therefore, you are not faithful.” On the other, it’s said that as emperor, Napoleon passed a law making it illegal for anyone to name their dog “Napoleon.”

The irony. The last surviving member of the Bonaparte family was Jerome Napoleon Bonaparte. While taking his dog for a walk in Central Park in 1945, the dog became excited by something and darted after it. The elderly man stumbled over the leash and crashed to the ground, sustaining injuries that would eventually kill him.