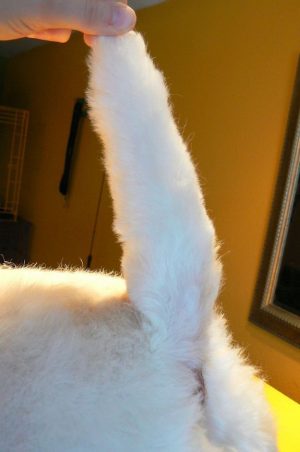 The term, “carrot tail,” can be found in most canine encyclopedias and dictionaries, and yet only one breed standard calls for it.  Mind you, a carrot tail “style” is often found in terrier trims. The shape of the tail is wider at the base and tapers to a point at the tip, and most might think it’s a pretty easy thing to accomplish. You’d be surprised. 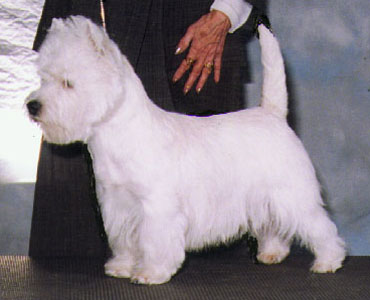 Image from Pinterest and we’d dearly love to credit this dog and handler. Anyone?

The carrot tail is achieved by trimming off excessive hair length at the tip by running one’s hand down the tail (thumb towards the tip), and stopping when the end of the tailbone can be felt under the thumb. The long hair is trimmed, the coat is fluffed, and the tail is shaped with straight shears, thicker at the base, and tapering to the tip. When the tail is held upright, there should be no dip right in front of the tail where it meets the spine, and the sides should blend smoothly into the rump. The back of the tail is trimmed close, but not so close so that it is bald-naked. After the basic shape is established, thinning shears can be used to soften the finish and give it a natural appearance.  Ultimately, the tail circumference should be proportionate to the rest of the dog, not too thick and not too thin.

From being a “style thing,”  the carrot tail enabled a farmer to grab their dog’s tail and pull them out from tunnels or vermin holes. This tail style is seen on Scottish Terriers and Cairn Terriers, as well as the only breed whose standard mentions it by name, the West Highland White Terrier.

Image found on Pinterest and happily credited upon receipt of information, though we suspect it should be attributed to “Christein” (last name unknown).

2 thoughts on “The Carrot Tail”