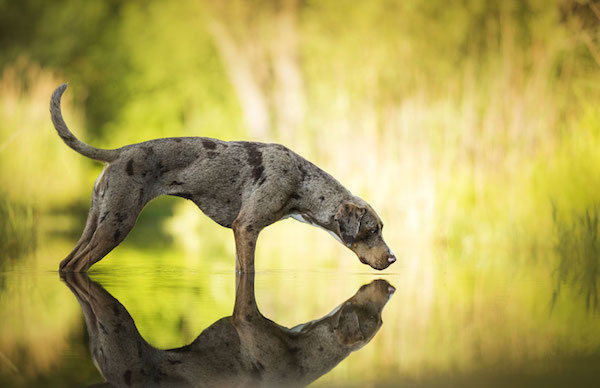 Catahoula Leopard Dogs can be a challenging mix of hard-headedness and independence, but many owners are of the opinion that the breed is second to none as a stock dog.  Owning a good Catahoula dog is like having an extra right hand,” says Renee Jackson.  She shared her experience of the night a hurricane hit: A dead tree was uprooted and fell onto hog pens next to it.  When the weather broke the next morning, she discovered that the pen had been destroyed, but the eleven hogs – five feral – were still in place, kept there by her Catahoula, “Jr. Jr.” from Tuska Homma Kennels from Jena La who’d been on the job all night, and all by himself.

The Catahoula is a versatile working breed, and for a cattle rancher, one of its main jobs is to drive a stray or lost critter back to its herd, or to separate single animals or groups. It does so in a style that is very different from other cattle or stock dog breeds which are often “heelers:” Dogs that move cattle by working from behind and “driving” the animals forward.

The Catahoula is more of a “bay” dog. His natural instinct is to stop the cattle and hold them “at bay” in a group or bunch until the owner arrives. To do this, a Catahoula works from the front in “header” fashion, barking and moving in a wide semi-circle to gather the cattle, or occasionally, to face a cow, bull, steer or heifer. Some Catahoulas will act as lead dogs who bark to aggravate the cows (or hogs) from the front.

Once the cattle have settled, the rancher pushes the cattle from behind while the dog(s) cover the area in front of the herd to discourage any thoughts of escape. Only if there is a need to put pressure on an animal to stop will a Catahoula nip at the beast’s nose for a split second, but never longer. Because a true Catahoula’s style is not that of a “catch” dog, he should never “hang” on.

A word about this photograph. Out of nearly  7,000 entries from over 70 different countries around the world, this image was the Second Place Winner in the Kennel Club’s “Photographer of the Year” Portrait Category. We are honored to have been given permission by the artist to share her stunning photograph of “Pumpkin,” a Catahoula Leopard Dog. Ms. Putzker mentioned that she seized the moment her friend’s beautiful dog stood in the water long enough for it to become still and reflect Pumkin’s image. She adds that it is one of her all-time favorite photos, and now it has become one of ours, as well. Ms. Putzker’s work has appeared on websites such as: Terra Canis, Dogs Today, Bored Panda, Coastal Canine, Wuff Magazin and N-Photo.