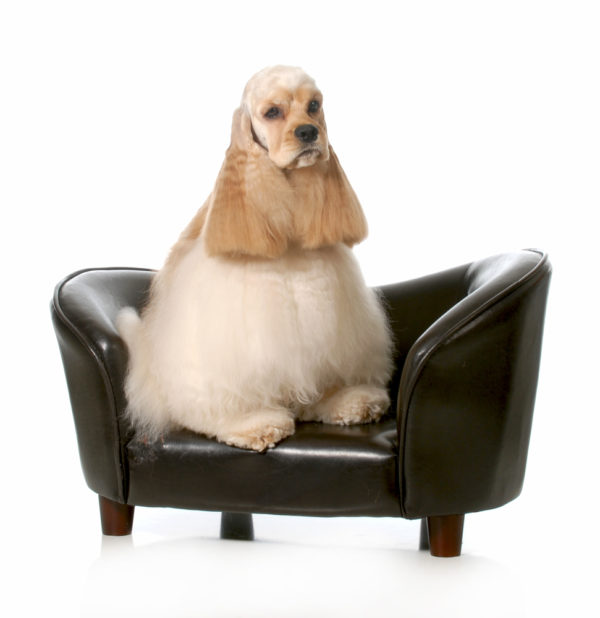 In the course of investigating our beloved purebred dogs, we look at a lot of books and articles (if only we could retain a quarter of what we read!), and we come across some marvelous statements. Here’s one of them:

What a true-type Cocker can’t say with his eyes, he conveys with his tail.

The statement is attributed to C. Bede Maxwell, the author of several breed books, but she “nailed” the Cocker Spaniel with that sentence. A “merry” breed to begin with, a Cocker Spaniel at work (for this is a sporting breed), has a tail that beats rhythmically like a metronome,  then quickens when a scent is picked up. As Maxwell writes, the Elizabethans recognized this as the badge of a Spaniel’s character. Maxwell goes on to impart an opinion that may be of interest to fanciers who show their Cockers: “A judge who merely ignores a handler pushing up a spaniel’s tail is not doing his job. If the fault it the handler’s, the judge should merely brush the hand away and allow the tail to resume a natural position.”

The breed standard calls for this! “The tail’s carriage should be carried horizontally or slightly elevated and displays a characteristic lively, merry action, particularly when the dog is on game.”

‘Think it’s not that important?  The standard mentions it again! “When the dog is in motion the tail action is merry.”

There is a reason the Cocker Spaniel is beloved. Its happy disposition and continuously wagging tail endears it to a legion of fans, and did so especially after World War II. In 1984 when Cocker spaniels were the number one breed registered with the American Kennel Club.

To be clear, the word, “merry” also appears in the English Cocker Spaniel’s standard, but it pertains to the dog’s temperament, not its tail.

We happen to think that we don’t have nearly enough photographs of Cocker Spaniels on our site, so please, share yours!