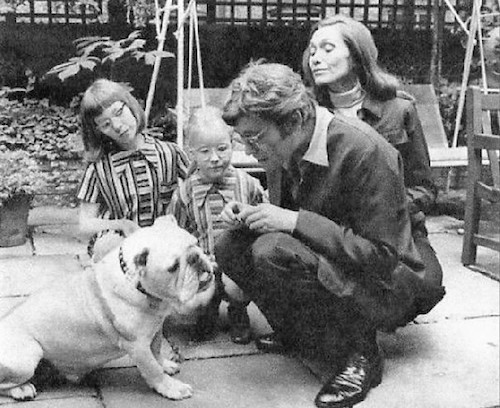 His capacity for drink was infamous, especially when his acting pals, Richard Burton, Michael Caine, and Richard Harris, went along. His escapades in pubs was surpassed only by his prowess as a ladies man, and had it been anyone else, he would likely have had a very short career. As it was, he racked up an impressive eight Oscar nominations in the best actor category, but incredibly, never won. He raised hell, but he also raised acting standards. He was Peter O’Toole, and will probably be always remembered as Lawrence of Arabia, his performance was ranked number one in Premiere magazine’s list of the 100 Greatest Performances of All Time:

What does an eccentric, larger-than-life personality have as a canine companion? A Bulldog, of course.

In the book, Public Places: My Life in the Theater, with Peter O’Toole, and Beyond, written by O’Toole’s first wife, Sian Phillips, she describes how she and O’Toole acquired a family of cats and a Bulldog called Scobie who absorbed a great deal of household energy. He’d been bought as a protector for the their children whenever O’Toole had to leave for a film shoot. Described as “fierce to look at, Scobie became a well-known regular of street-life in Hampstead, “plodding out twice daily on what looked like a glum walk.”  Scobie occasionally slipped out of his leash on the Heath, and once during a moment of freedom,  the Bulldog charged up the the steps of a trailer in town for a fair, and smashed his way into a china cabinet much like a Bull(dog) in a china shop.

In another anecdote, Phillips writes, “…every time one of the many burglar alarms in the house went off at night, he [Scobie] greeted the police, tail wagging, dribbling affectionately on their trousers…”

Scobie lived for thirteen years, and while adorable and totally useless in the job for which he’d been engaged, Phillips concluded that the Bulldog personiﬁed their home life — sweet and slightly cockeyed. Peter O’Toole passed away in 2013.

Image of Scobie with Peter O’Toole, his wife, Sian Phillips, and their daughters found on Pinterest and happily credited upon receipt of information