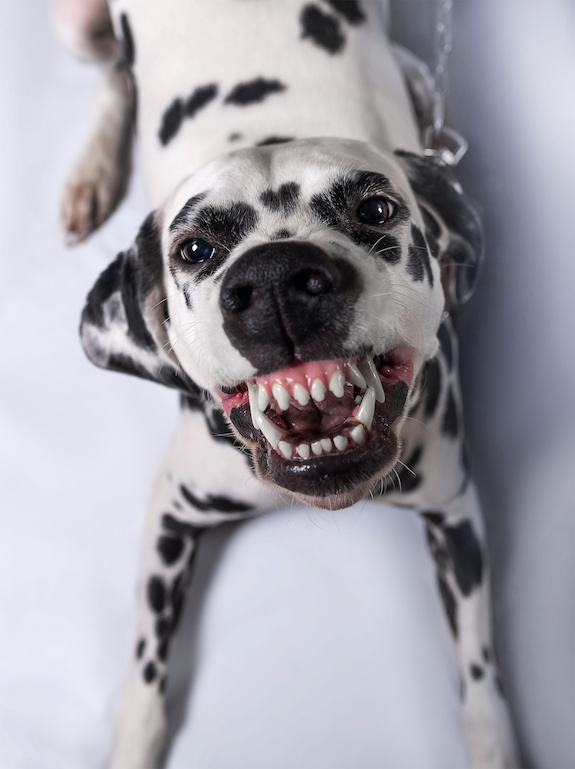 Before carriages and coaches, people traveled on horseback. They needed a dog that would keep the horse company while guarding against its theft, or the theft of the saddlery (or its contents) on its back. When a companion dog accompanied a ridden horse, that canine was referred to as a “road dog.”

Dalmatians didn’t miraculously appear with the advent of wheeled transportation pulled by horses, they frequently were those road dogs. Their famous affinity for equines notwithstanding, there is another aspect to this breed that amuses us in the telling of it.

Dalmatians are eager, energetic, and loyal dogs. If they were ever aggressive in their history as guard dogs, a gentler disposition has been bred into them over many generations. This is a tough sell to the person facing a furrowed muzzle set with deep creases, flews drawn back, and teeth bared to resemble a ferocious snarl. Dalmatian owners, however, recognize this curious trait seen in many Dalmatians as the Dalmatian Smile, an “I’m-so-happy-to-see-you” expression which some have explained as a disconnected reflex. It’s aggressive body language without its intent, as Mike Loades writes in his wonderful book, Dogs/Working Origins and Traditional Tasks. We’ve heard this grin called a “smarl,” though readers should note that if a Dalmatian is growling with its tail not wagging, it it a snarl and the dog is wary, if not angry. If the tail is wagging, it is a smarl, and there’s a big difference. Not all Dalmatians smarl, and because you don’t want to get this wrong, it’s best to leave the dog alone until his or her owner is present and can talk to both you and the dog.

By the way, do you know what a Dalmatian says after dinner? “Thanks, that really hit the spot.”

If you have a photo of your Dal’s smarl, let’s see it!

Our image comes from the blog, Everything About Dalmatians, and as we didn’t see a copyright warning, we hope it’s ok to share here.