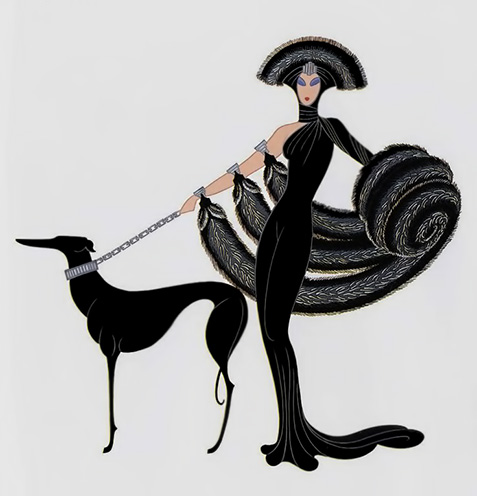 Romain de Tirtoff, a Russian born artist who called himself “Erté” (for the French pronunciation of his initials) was closely associated with the Art Deco movement of the early twentieth century. It’s not a coincidence that when he included a dog in his artwork (see left), it was often a Borzoi since both breed and art movement exemplified sleek, stream lined form. Borzoi were hugely popular through the 1920s and 30s, and we’d like to think that the likes of Jean Harlow, Greta Garbo, Norma Shearer, Sarah Bernhardt, Theda Bara, and Jean Arthur – movie screen sirens all – didn’t own Borzoi simply as fashion accessories.

Another Borzoi owner was this lady (skip ahead to the 1:00 mark in the video clip below to hear her famous line – and so you recognize her co-star?). Mae West, by the way, wrote nine of the 13 films in which she starred, was the highest-paid star in Hollywood in 1935, and the second highest-paid person in the United States. It’s said that her figure inspired the now iconic Coca-Cola bottle.

West appeared with her Borzoi in the photo below. We’re struck by how little the breed has changed since the 1920s when the picture was taken. 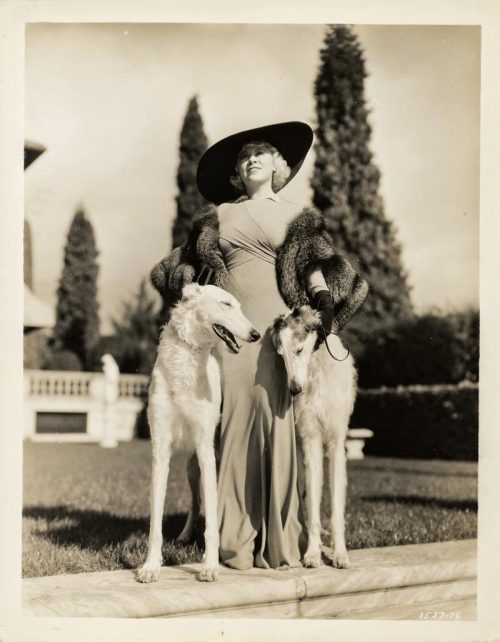