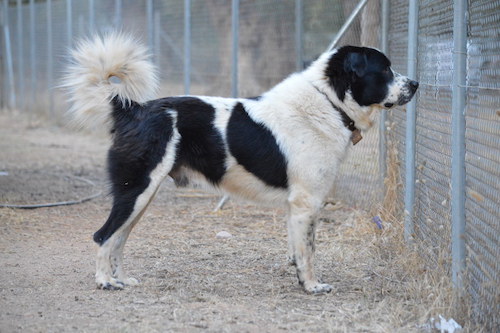 We take no joy in posting about yet another breed in trouble.

Meet the Greek Shepherd, a dog that for centuries has been guarding livestock in the mountainous regions of Greece. Its adaptation to the adverse conditions of mountain farming helped the dogs develop traits that made them invaluable and irreplaceable guardians capable of dealing with the attacks of large carnivores, such as the bear and the wolf.

Experts warn, however, that the breed is now at risk of extinction. Between the decline of livestock farming, and a careless increase in uncontrolled interbreeding with other dogs, the Greek Shepherd’s distinctive characteristics are becoming lost. It has been estimated that currently, fewer than 3,000 pure Greek Shepherd dogs remain in Greece, and this brave, decisive, and loyal working dog with a highly honed sense of duty deserves better. Folk legend held that these dogs had magical powers and could heal infirmity, and children were encouraged to care for puppies so that the strength of the dog would feed into the kids.

An organization called Friends of the Greek Shepherd is trying to help the breed recover and continue to serve as the iconic Greek dog.  ARCTUROS has also been implementing the Greek Shepherd’s Breeding Program since 1998.

Unless you speak Greek, you won’t understand a word in this video, but you will get to see some lovely dogs:

Though the dogs may seem “chill,” observers – or those at the wrong end of a irritated dog – are shocked by the swiftness and high speed when these dogs see a loved one or flock member in danger. Yes, they are independent – as most LGDS  (Livestock Guardian Dog) are, but they obey the commands of their ‘flock leaders,’ and only them. This is not a good choice for a first time owners, and as the breed doesn’t have a fawning, friendly nature, it needs time to socialize with visitors, and then only with proper introduction.

Our “research travels” suggest that because – mythologically speaking – the Greek Shepherd was loved by the moon goddess, Selene, a post title was “born.”