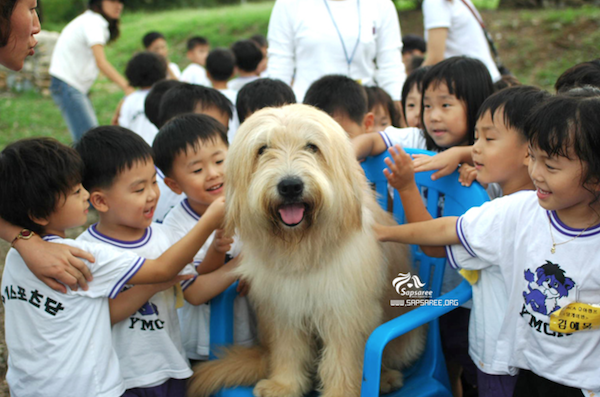 For 500 years, the Chosŏn Dynasty ruled Korea, a time when scholarship flourished, the Korean phonetic alphabet was invented, Confucian ideals were encouraged, and the region experienced years of internal peace and stable borders. The dynasty started by by Yi Seong-gye left a substantial legacy to modern Korea: Its modern Korean language and dialects, most of modern Korean culture, its etiquette, and its societal attitudes. It is telling then, that during this period of cultivation, the Sapsaree was so esteemed as to have its image placed on many imperial seals.

The Sapsali, the anglicized version of Sapsaree, was a cherished companion among royal Korean families who believed the dogs to be an instrument of good fortune. Indeed, the breed’s name means, “one that roots out evil spirits,” and this explains the breed’s nickname,  “Ghost Dog.” It was believed that ghosts were deathly afraid of a Sapsaree, which effectively drove them out of a home.

Chi-u, the fourteenth emperor of the first Korean Empire, was said to have carried an emblem in the likeness of the Sapsaree because he believed its spirit protected him. He was never defeated, and in fact, was revered as the God of War.

Tragically, the future would be devastating to the breed. The enchanting dogs were killed in huge numbers (100,000-500,000 by some estimates) by the Japanese military between 1910-1945 through Order No.26, which was to slaughter domestic dogs in Korea, their fur used to make winter coats and boots for soldiers serving in the extreme cold of Manchuria. When South Korea emerged from the turmoil of two wars and decades of poverty, the dogs had all but disappeared.

In the mid-1960s, Professor Sung-Jin Ha in the Department of Veterinary Medicine in Kyungpook National University in Daegu, South Korea, searched for any Sapsarees that had survived the Japanese massacre. Thirty Sapsarees were found in the backwoods of Kyungpook province, and taken to his ranch in Gyeongsa where they were nurtured. It was his son, Dr. Ji-Hong Ha, a U.S.-educated geneticist, however, who helped the breed make a remarkable comeback. In an interview with The Korea Herald, he said, “When I came home in 1985 after studying Genetics in the US, I found eight Sapsarees in my father’s kennel which he set up to preserve the breed. It struck me that these dogs might be the last remaining ones of the kind.”  By using a combination of traditional breeding with advances in modern DNA technology, and adopting a non-restricted selection system for specific characteristics based on size and appearance, he overcame the genetic problem of inbreeding depression and prevented a bottleneck of reproduction at an early stage.

Aside from its loveable shaggy dog appearance, the breed is sweet tempered. Lee Dong-Hoon, a researcher who did his graduate dissertation on Sapsarees, said their personality and huggable size make the dogs a favorites among hospital patients. He also said, “Children who are recovering from bullying by other children find themselves opening up to Sapsarees.”

In 1992, the Sapsali, one of four dog breeds native to Korea*, was designated National Treasure No. 368 by the South Korean government.  As of 2011, more than 1,200 Sapsarees had been placed with families across South Korea, and it has been recognized by both the Korean Canine Club, an FCI affiliate, and the Korean Kennel Club.

There is a Facebook page, though it hasn’t seen activity for several months, and a foundation that was set up by Dr. Ji-Hong Ha. The Korean Sapsaree Foundation is the only organization in Korea that promotes the awareness, preservation, and welfare of Sapsaree dogs with a systematic tracking and maintenance of the pedigree using DNA research. Today, it’s believed that there are about 3,000 Sapsarees living in Korea, and about 100 in the U.S.

Sapsarees have been called Korea’s living history, and since National Purebred Dog Day has always maintained that our breeds are museum pieces with a pulse, we are eager to see this breed thrive.

* The other native breeds are the Korean Jindo, the Korean Dosa Mastiff, and the Poong San.

Image: This marvelous photograph comes from the Korean Sapsaree Adoption website, a foundation that in 2011 initiated an effort to bring a breed chapter to the U.S. to better care for Korean Sapsarees living in the U.S.