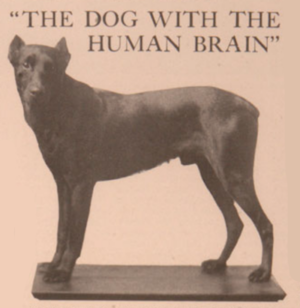 “My breed is as dumb as a brick,” said no one ever. Well, almost never. We suspect that the majority of us think our breed is reasonably bright.  That said, when you read the following line: “The dog with the human brain,” do you immediately think of your own breed? (Border Collie people, you don’t count because your dogs are extraterrestrials).  If you do think this applies to your breed, move over because we’ve come across evidence of a few people who feel the same way, and psssssst, they may not have your breed.

In an April 1916 article from Country Life in America, the author, Walter A. Dyer wrote of a Doberman Pinscher who gave evidence of “a remarkable brain that distinguishes the entire breed.” Dyer repeated his assertion in “The Dogs of Boytown.”

This may comes as a rude surprise to Schnauzer owners whose breed has also been described as “the dog with a human brain.” It must be so because it says so right there on the Schnauzer Club of America’s website: “This sometimes mischievous, quick and active dog is in reality a reliable working dog with a superbly intelligent mind. This is the dog that is often called “the dog with the human brain.”

Well now, what’s a Weimaraner owner to think, because their breed has also been described as “the dog with the human brain.” In fact, one source speculates the Weims come with a highly developed “conniving gene.” We know this must also be true because MSN did a “filler” piece about the breed, and wrote: “Weimaraner Facts: The Dog with the Human Brain,” and MSN can’t be wrong, can they?

What we think is that every single breed has qualities one could describe as “human-like,” though there are times we’re not sure that’s a compliment. Just saying.