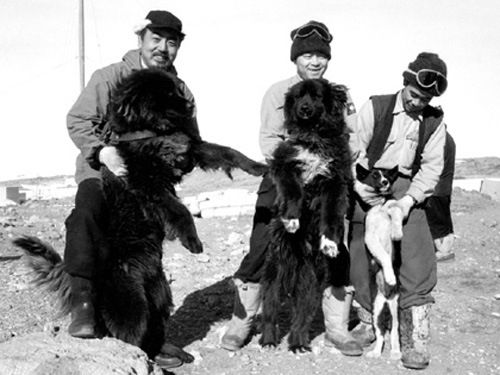 That the Sakhalin Husky is all but extinct is a tragedy, and that few people know its story is marginally less so. The breed was the inspiration of a hugely popular Hollywood adaptation of the true story of a dogsled team abandoned and left chained outside the Showa Antarctic Research Station in 1958. A brutal storm forced an evacuation of personnel that assumed it would return quickly to retrieve the dogs, but it was a year before they actually got back. If this sounds familiar, it’s because the 2006 Disney move, Eight Below, was based on this event, and the dogs involved weren’t Siberian Huskies as seen in the movie, but Sakhalin Huskies (also known as Karafuto Ken). Most of the dogs died, but eight had slipped their collars and were presumably able to hunt for food; of those dogs, only two were found alive. Three year old, “Taro” and “Jiro,” became national heroes after having survived eleven months on their own. After their eventual passing, they were stuffed, and their remains now reside at the Hokkaido University Museum and National Science Museum in Tokyo, respectively.

A Sakhalin Husky, mistaken for an Akita or a Siberian Husky, came from Sakhalin, a large island in the Sea of Okhotsk north of the northernmost Japanese island.  It was never able to make a comeback after the decimation caused by World War II, and as of 2011, only two known purebreds were left (and they were 12 years old then).

Below is a slide show of the dog who were on the expedition:

To see what became of each individual dog, click here.

One of the best known monuments (see below) to the dogs was erected at the foot of the Tokyo Tower in 1959: 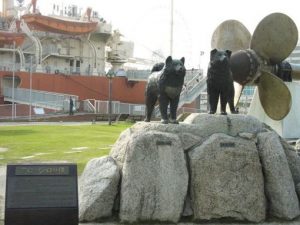 Our thumbnail image is of the actual Sakhalin dogs, “Taro” (left) and “Jiro” (center), who were left to endure harsh Antarctic conditions for a year, greeting members of the third expedition that came for them in 1959. Photo from the Japanese government