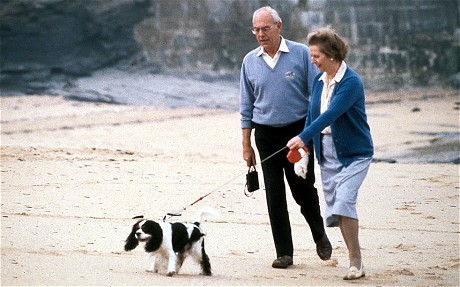 Margaret Thatcher was a tough and controversial figurehead of conservative thought. Despite having said in 1973 that she didn’t think there would ever be a woman prime minister in her lifetime, she actually become the first female prime minister of Britain six years later.
Thatcher was also a confirmed affectionado of dogs. During her professional life, she was photographed with every kind of dog from a Whippet and German Shepherd Dog to a 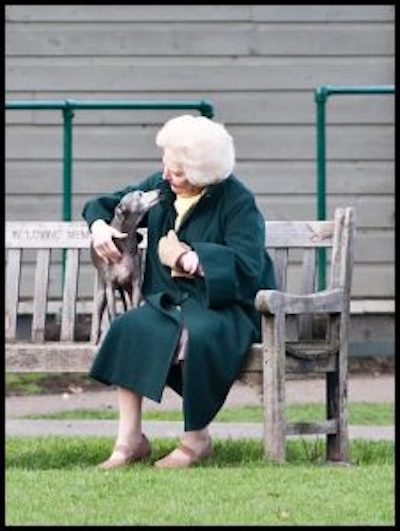 Cavalier King Charles Spaniel. In her retirement years, she was known to visit parks just to fuss over any dog within range, and a photographer happened to catch the moment an Italian Greyhound jumped onto a bench to visit with her.
It’s said that Mrs. Thatcher’s last smile on earth came as a result of seeing a video of Dachshund puppies. The puppies’ mother belonged to her former secretary, Lord Charles Powell, who showed the video to her on his iPad. Two of the puppies would eventually be given to Tony Blair.
As it happens, we heard from the breeder of that Iggie who had jumped onto the bench to visit Mrs. Thatcher. “Francis” had sold the puppy to a couple who were out on a walk with their IG, “Bertie,” when by chance, they met Mrs. Thatcher and her companion resting on a bench. As Francis wrote to us, “Being a typical Italian Greyhound, Bertie made a beeline for a comfortable lap – and she greeted him with delight.
“Sadly, she was already beginning to suffer from dementia by that stage, so no real conversation was possible between her and Bertie’s owners, but she obviously thoroughly enjoyed her Bertie cuddle!
“Bertie himself enjoyed the high life with his jet setting owners, he travelled to most places with them, and had an extensive wardrobe – even including his own purpose made leather flying suit! He had another brush with fame when he was chosen to feature on the cover of Country Life.” Francis attached the photo that she was sent by his owners which you see here. 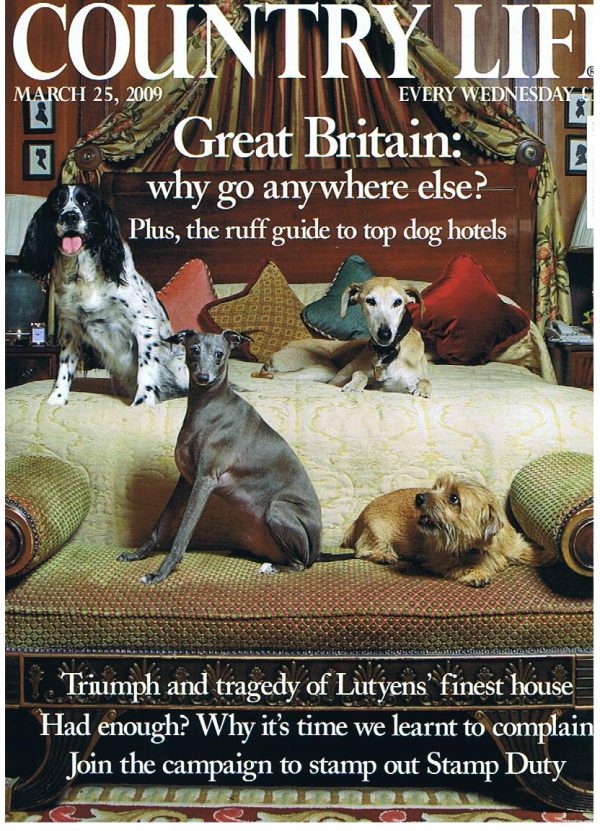 Images: The Thatchers on the beach with a tricolour that may have belonged to Thatcher’s then Chancellor of the Exchequer Nigel Lawson, (father of TV cook Nigella Lawson). Photo of Mrs. Thatcher with Bergie on a park bench; Photo of Bertie sharing the cover of Country Life