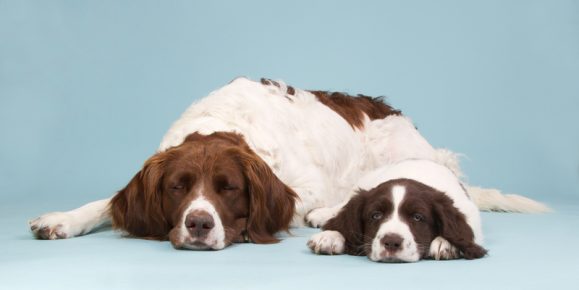 As an outsider, which is to say someone outside the breed, it’s hard to read about the history of the Drentsche Partridge Dog (or Dutch Partridge Dog) and not see the importance of the role Baroness M.C.S. Van Hardenbroek had in the breed. With the encouragement of G.J. van Heek, Jr. and P.B.V. Quartero, Van Hardenbroek’s strong promotion of the Drent (as the breed is known colloquially) got the breed officially recognized by the Board of Kennel Management in 1943; in 1948, the first breed club was founded, the Dutch Association “De Drentsche Patrijshond.”

Our interest in Mrs. Van Hardenbroek’s influence, however, has to do with color, and we’ll get to that further down.

Drents had been present in the Netherlands for centuries, particularly in the province of Drenthe, one of twelve Dutch provinces. Drenthe was unique in that it allowed common gentry the right to hunt even 300 years ago, and that the breed was part of the fabric of Dutch life was reflected in its appearance in artwork. One such painting was Gabriel Metsu’s The Hunter’s Gift. It was this painting that inspired Mrs. Van Hardenbroek to start a breeding program for Drents, and she based her ideal on the dog in this painting, a type that was heavier and stockier than earlier Drents.

Drents had always been brown and white, a color easily seen in the field and not be mistaken for a fox, but in a series of correspondences that appeared in the Hunter Association magazine, Mrs. Van Hardenbroek speculated that white with orange patches (or plates) was actually the most common color, an opinion she later fine-tuned to be white with cinnamon-brown plates. In the marvelous book, Amazing Dutch Dog Breeds by Janny Offereins, Snoek & Diana Striegel-Oskam, the authors hint that Mrs. Van Hardenbroek’s “royalist outlook” may have accounted for her original fondness for orange.

According to the aforementioned authors, some breeders were influenced by Mrs. Van Hardenbroek’s views on the orangey color, and bred Drents whose brown was as light as possible. They called this the “original orange color,” and it may or may not have involved other breeds.

The FCI breed standard today calls for a Drent to be white with brown markings, with or without spots or ticking. It adds that, “The roan colour is not permitted (mixture of brown and white hairs all over the body). Less desired is a mantle. Ears are brown, just like the hair around the eyes.”  The AKC and United Kennel Club standards reflect this exact wording, and the shades of brown are not specified, but the standard presented by the Drentsche Patrijshond Club of North America writes: “COLOR: Color may range from a rich dark mahogany brown, shades of milk-chocolate to lighter shades of brown, which can nearly appear reddish orange.”

As for the diluted brown (or “original orange”) created by breeders influenced by Mrs. Van Hardenbroek’s take on the color, the book, Amazing Dutch Dog Breeds, writes that it is rarely seen anymore.