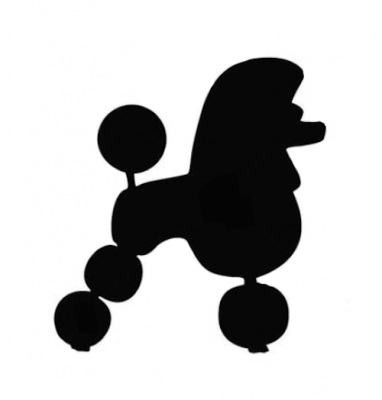 The Poodle in this image is rocking an “English Saddle Clip,” a trim that was seen more often in the 50s and 60s than one sees today. When the great Annie Rogers Clark became the first woman professional handler to win Best in Show at Westminster in 1956,  the Toy Poodle she handled, Ch. Wilbur White Swan, was in an English Saddle clip.

The reasons for why we don’t see it as much these days are as varied as the groomers who have an opinion on it. Some feel the clip doesn’t flatter most dogs, but this may be because it’s harder to set the lines and have them be flattering to the dog – the more hair the dog has, the harder it is to set the lines.

Some Poodle groomers say that it takes a really good dog to pull off the clip as judges aren’t used to seeing it. Others say the clip covers a multitude of structural shortcomings. The trim tends to make a dog look larger, so it’s a good choice for a fine boned or a very diminutive poodle. Clever groomers, it’s said, can craft a shelf where there isn’t one, and create an illusion of better rear angles. Placing bracelets further down on the leg may also distract or even hide issues with feet or pasterns, as well. To this, other fanciers shrug their shoulders and say that a competent judge will find those issues, anyway.

No one debates the other considerations inherent in an English Saddle Clip: It’s not a good choice for a soft coat. Proportions of the pom pons on the rear have to be “just so” to make them not work against the dog. Scissoring, and maintaining seven pom pons is time consuming, and, in the words of one person, is “a pain in the butt.” It takes a well trained eye to place the pom pons properly, more time to grow out mistakes in placement, longer time to dry, and more time to scissor. Brush and comb work need to be done daily and with extreme care, while scissor and clipper work take a high amount of skill. Practice, balance and tailoring to each individual dog is ultimately important,  but then, that’s probably true of any clip.

Poodle people, when was the last time you saw an English Saddle Clip, and if you have a Poodle in any kind of clip, share their picture and tell us the name of it?

6 thoughts on “The English Saddle Clip”