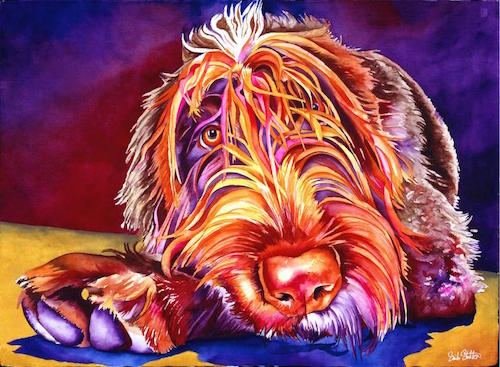 Perhaps the most recognizable aspect of the Wirehaired Pointing Griffon’s face is the breed’s beard and eyebrows, required features per the breed standard. They are extensions of the undercoat which gives the Griffon its wonderfully “unkempt” appearance. Underneath the hair is a skull that’s “half and half” (or equal length from nose to stop, and from the stop to the back of the head (or occiput).  Some have suggested that one way to evaluate the square-shaped head is from the dog’s profile which should give the appearance of two squares making up one larger square: The first square is from the nose to the stop, and the other square is from the stop to the back of the head (or occiput). Together, the overall appearance is of one square. We also came across one source that cited the Wirehaired Pointing Griffon’s long face which gives the breed extra area for scent receptors.  Perhaps a WPG expert could weight in on this?