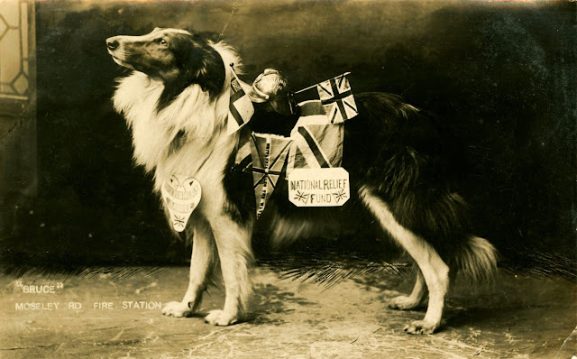 World War I was known as the Great War, and “The War to end all Wars,” and sadly, it was either outdone by subsequent wars, or it didn’t live up to the promise of ending war.

The impact of WWI on dog breeds is well known to fanciers and historians whose breeds were almost obliterated by it. Dogs protecting their homes were shot on sight. Hostility toward Germany resulted in a decline in the popularity of German breeds such as the Dachshund, or lead to a name change: To wit: The British didn’t like calling German Shepherd Dogs by that name since Germany was their enemy at the time, so they renamed the breed “Alsatian.” Alsatian came from the French town Alsace-Lorraine, the area that France gave to Germany in 1871 after the Franco-German war. This name continued to be used after WWII for years, and in 1977, the breed name was officially changed back to German Shepherd Dog again in Britain after campaigns made by German Shepherd Dog breeders. Americans had less of an issue calling the dogs German Shepherds, so Alsatian never become common in USA.

Those were little things.

Attacks on German breeds became more common during WWI, and it wasn’t unheard of that stones were thrown at innocent dogs being walked on a leash in parks or on the street. Dog breeding and showing came under attack by those who felt it was inappropriate, and feeding dogs during wartime lead to charges of waste, and a lack of patriotism. Some people even shot their entire kennel of dogs rather than see them starve because of food shortages.  In turn, fanciers responded to this “agitation against dogs” by turning on mutts and stray dogs, and that, in turn, exposed deep divisions within the dog breeding community. Curiously, “Great War dogs” became icons of patriotic endeavor, second only to horses (Lemish, 1996, pp. 11-32; Morey, 2010, p. 227; Swart, 2010), and in Great Britain, dogs collected money for assorted charities at train stations and public squares by wearing collection boxes attached to harnesses.

Breed discrimination, food shortages, name changes – these are known to anyone who has studied the history of certain breeds, but lesser known is the role played by England’s Kennel Club on the dog fancy. An insight is provided by Mrs. Nagle­-Sulhamstead which is recounted in Alma J. Starbuck’s book, The Complete Irish Wolfhound:

“I had my first Irish Wolfhound in 1913. I bred one litter during the first World War, at that time the Kennel Club would not register any pedigreed dogs except bred by their special permissions, which are rarely given owing to the food position.”

Needing permission from a kennel club to breed in order to be able to register puppies is not something we think about today, but it was a desperate time which perhaps called for desperate measures.

There is a particularly good paper on the subject that may interest readers: The Dog Fancy at War: Breeds, Breeding, and Britishness, 1914-1918 by Philip Howell

Image: Collection dog found on Pinterest and happily credited upon receipt of information

One thought on “The Fancy during the Great War”