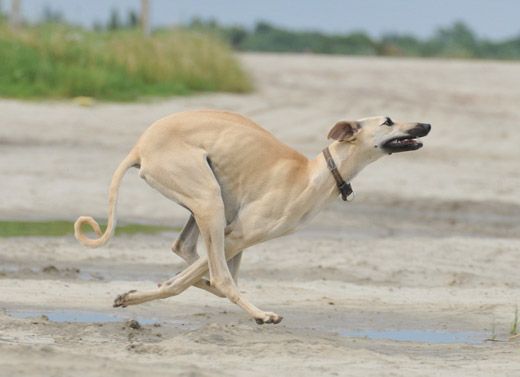 Nicknamed the “Arabian Greyhound,” the Sloughi is a lean, swift coursing hound who hunted a variety of game in North African deserts.  The most treasured dog of Northern African Bedouin tribes, these dogs were kept in tents and cherished for their steadfastness and speed on the hunt.

The operative word in the last sentence is “speed.” The Sloughi was bred and built to run. In fact, the Sloughi is thought to have gotten its name from the Arab word meaning “fast as the wind.” Sloughis will run after anything that catches their fancy, and they’ll run really fast. To underscore the point, we recommend that you watch the video below twice. Once to watch the dogs, and the second time to look at the background. Only when you see how quickly the scenery zips by do you realize how wicked fast these dogs are:

Few would contest that the Sloughi is among the fastest (and most heat-tolerant) of all breeds. Historically, a Sloughi was kept on a lead, often riding on the back of a horse or camel.  Once a prey (usually a gazelle or hare), was spotted, the dog was unleashed to pursue it. Sometimes, several Sloughis were let loose, particularly when chasing a larger animal such as a gazelle.

Needless to say, Sloughis are very athletic dogs that crave opportunities to run.  They are said to have more stamina than most other sight hounds, and have a feather-light double suspension gait that is spectacular to see in action.